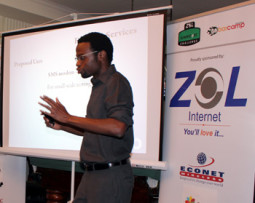 This short series of 6 articles will cover the profiles of each of the six finalists that made it into the finals of this year’s ZOL Jumpstart Challenge to be held this Friday, 14 September.

Nimbus Crowd is a SMS application that uses crowd-sourcing to answer questions. The way it works is a person sends in a question via SMS. The question is then sent to other people via SMS, who have an opportunity to respond. All the answers are collected, and a single answer is chosen which best represents the opinion of the “Crowd”. Then that answer is sent back to the person who originally asked the question.

The idea was born out of Murove’s own frustration finding answers to questions that he had. Murove explains:

Nimbus Crowd is built for anyone who has a question that needs to be answered as quickly as possible, and with as little hassle as possible. That’s why it’s built for SMS. No logins, no 3G required, and it works on any phone.