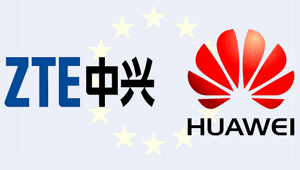 Reuters reports that the lawmakers found that companies that had used Huawei equipment had reported “numerous allegations” of unexpected behavior, including routers supposedly sending large data packs to China late at night.

In a press release by Huawei, the company vehemently denies any suggestions that it is linked with any espionage attempts or under the influence of Beijing. Whether any of the US’s concerns are substantial or based mainly out of fear, or merely trade protectionism, no one knows.

The US is not the only country to block Huawei, India has also previously expressed concerns over the security threats posed by the Chinese behemoth. Australia also blocked Huawei from bidding on their national broadband plan.

The two companies have however largely been at the forefront of Africa’s mobile revolution, fueling it with friendly funding terms and the low cost equipment. Even though deals with European players like Ericsson happen here and there, the heavy and deliberate presence of the Chinese operators on the continent is clear. The rapid expansion for example of Zimbabwe’s mobile telephony in the past 3 years has been built atop the equipment supplied by these two giants.

Do you think we have anything to fear? Or are we immune to the rise of cyber espionage since we are relatively a small player on the global scene?

Is there any other option for us other than continuing our use of the low cost equipment? Would our telecoms operators have afforded the rapid expansion of their networks they have all registered in the past few years? Interestingly, I am writing this piece connected to the internet through a ZTE modem.

What are your thoughts and views on the issue. Is it a matter of Goliath crushing David? Or do these companies really pose national security risks? Substantial claims by the US or just a case of impeding competition?

25 thoughts on “US Lawmakers scared of Huawei and ZTE. Should we also be worried?”