You’ve probably seen the Easi logo on the right in a number of retail outlets in the country. The company has entered the market to provide a South African designed solution to simplify the electronic vending of prepaid products. So far Easi has signed up all mobile network operators in Zimbabwe, internet providers like Broadacom and Africom, mobile health insurance startup MedAccess, new airtime & microcredit startup LendMe, and MTC Lotto. Rusch says they’re currently finalizing arrangements to have biNu (for the biNu credits).

Their plan is to make it as easy as possible for anyone to buy prepaid services, you telephone airtime, your internet bundles, and even plans to integrate and provide ZESA prepaid airtime on the platform. If you use any of the new prepaid internet services by companies like Brodacom and Africom, then you’re probably familiar with the frustration of loading up your credit when you run out. The companies just don’t have a large enough network of agents. The national power company’s new prepaid electricity product has the same issue, one we have written about here before.

Easi is here to solve that problem.

We had the opportunity to speak to the founder of the company Phil Rusch recently and he says he’s pleased with the progress they have made since they connected their first device in April this year. Easi now have over 200 connections in the market and in September processed about 25,000 transactions. He says the number of transactions has increased exponentially, sometimes by as much as 300% month on month.

On how he identified and decided to address the gap in the market, Rush says he saw the devices in Zambia, spoke to the guy who was doing the agency there and learned that the solution was part of Saicom’s proprietary management platform and hardware. Saicom are the same guys that used to do the Adondo pay phones and, when that market started declining due to an increasing mobile penetration, they decided to add electronic vending to their products. From Zambia, Rusch decided to implement the solution in Zimbabwe and spent the next 9 months setting up the business. 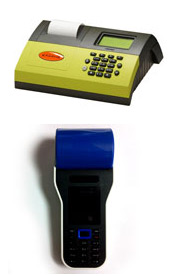 “I just figured there’s a gap in the market and the market is going to change towards that [electronic vending] in time. Even in places like South Africa now you don’t really see scratch cards anymore,” Rush explains.

How the platform works is that Easi loads bulk pin codes from the providers onto their platform, and their vendor devices connect to the platform via GSM and GPRS. The devices look like the two on the left. Rusch says they are also testing a pin-less credit vending with some providers locally and they expect to launch the service soon.

Their market target for the devices ranges from corporates right down to tuck-shops and street vendors.

Asked whether they feel threatened by new mobile money method to purchase credit like EcoCash Rush says he doesn’t think so, and explains “Down the road as we connect more and more different things, we bring more central value, for example prepaid electricity, insurance policies, bus tickets, DSTV, gift vouchers, event ticketing and other things”.