Since information started coming out about Zimswitch’s new Vpayments internet payments gateway, we have received many questions from readers both in the comments and in our email. Mostly, developers and internet entrepreneurs are curious to know how they can start using Zimswitch Vpayments on their websites. Last week, we met the Zimswitch team and they provided answers to some of those questions.

Zimswitch, a national switching company recently introduced an internet payment gateway service called Vpayments. Being a financial switch basically means they provider interconnection between their member banks. Zimswitch member banks account for about 95% of the 1.5 million banked population in Zimbabwe. After hyperinflation and dollarisation, many Zimbabweans moved away from the banks, but now they are moving back, with the number of banked individuals holding a bank account expected to exceed 3 million by the end of 2013.

It’s an online payment service modeled on PayPal. It handles the complex process of interchanges that must occur between banks, merchants, and online shoppers making possible for merchants with bank accounts in Zimbabwe to accept payments from banked customers online. Unlike PayPal though, so far Vpayments requires you to be a banked customer with one of their network member banks. But being banked doesn’t necessarily mean you need the traditional bank account; it can just be an easy to get ‘lite’ bank account like those you get with CABS Textacash, POSB mobile banking or FBC Mobile Mula.

To understand Vpayments, a helpful way is to think of it as an online Zimswitch Point of Sale device. That is, as long as you bank with a member bank, you can use Vpayments to pay for products on a website that has the option from the convenience of your office or your own home, wherever you have Internet access. Payments are in real time just like POS devices meaning an internet merchant can verify the success of a payment immediately and proceed with the transaction.

Which banks are integrated to the Vpayments?

The Vpayments service is under pilot tight now with 4 banks, the following:

According to Zimswitch, the pilot will be online with all 4 banks within the next two weeks. Each of the 4 banks has a number of pilot merchants they are working with, one of which is classifieds.co.zw. Classifieds is being considered one of the service’s key merchants bringing as it’s bringing a potential 750 merchants to the platform and many thousands of products and services. Other merchants may include internet providers, supermarkets like spar, fast foods, general online shopping stores etc…

Zimswitch is planning to have all the banks that are currently on Zimswitch Shared Services integrated to Vpayments by mid-2013.

Which of these banks can I walk into right now and have my Vpayments merchant account setup?

Zimswitch couldn’t speak on behalf of the banks but indicated that the banks are keen to sign up merchants into their pilot if there’s demonstrable business already taking place. In short if you approach one of these banks, chances are they will tell you they are still piloting Vpayments.

Our advice if you can’t wait for the few-more-weeks Zimswitch is promising is to present a convincing case to the relevant people at the bank and, if that fails, to try another one. It’s still in pilot so don’t expect to just walk in and come out 20 minutes later with a vPayments merchant account.

What will it take for your bank to integrate and allow you to sign up as a merchant or customer?

16 of the 19 Zimswitch member banks are already on Zimswitch Shared Services platform, i.e. the bigger platform Vpayments is part of that incorporates ZimSwitch Mobile, ZIPIT, the ZimSwitch Utility Payments gateway, POS Hosting and other hosted services such as “Instant Banking” and Internet Banking.

For a bank to offer Vpayments they will not need any additional physical Vpayments infrastructure investment as the service is part of ZSS. In short they just need to get their internal people and process flow sorted for the service and then request Zimswitch to enable the service for them via a certification process.

Zimswitch has an API resources document available for download on their site, you can find it here.

I am not a developer; I just want to have Zimswitch Vpayments on my site

Once you have a merchant account with your bank, find a developer and ask them to integrate Vpayments to your eCommerce website. There are also some web development companies that are coming up with ready to use Vpayments accepting eCommerce websites. Webdev for example is coming up with a rent-a-cart service that will allow non-technical people to start accepting payments in a relatively easy fashion. We haven’t used or demoed this service yet so we can’t say more on how it will work.

WebDev is also selling Vpayments modules for the most common cart systems such as OpenCart – prices start from $90. Visit the Vpayments portal (https://secure.zss.co.zw/vpayments) or the ZimSwitch website (www.zimswitch.co.zw) for more information.

I want to buy using Vpayments

Zimswitch will basically verify that the bank card you linked to the new Vpayments account is yours by requiring you to enter certain information, as well as by debiting your bank account with a random amount (less than $1.00). You must then confirm that amount from whatever bank statements you get (mobile banking, internet banking, standard statement etc) on your Vpayments account and, after doing that successfully, your Vpayments shopper account will be ready to use across all merchants regardless of which bank the merchant uses.

Can I link my EcoCash wallet to Vpayments?

Can I have an option to accept other means of payment on my website?

Yes, that’s really up to you. You can accept MasterCard, Visa, PayPal, Cash, Bank transfers and other means in addition to Vpayments. Vpayments is simply a new option available. It’s game changing in that so far it hasn’t been convenient because of restrictions major payment gateways have in place for people using their services from Zimbabwe.

What will it cost me to use Vpayments?

This is mostly up to the bank holding the merchant account in much the same way POS works but transaction will be charged through an MSC (Merchant Service Commission) from about 1% to 5% of the transaction value.

I don’t have a computer or smartphone; can I pay using Vpayments from a basic feature phone?

So far, only the desktop website version is ready for public use so basically your computer and smartphones are good to go but some feature phones may have some issues. Zimswitch says they are aware of this needs reality and are working on a mobile version that will work on a wide range of basic feature phones including those low cost Chinese feature phone.

What security is in place for a customer to have a product or service delivered when they pay via Vpayments?

For Merchants Vpayments has two types of account (well 3 actually, but let’s explain this for now); a Standard Merchant type and a BuySafe Merchant type. It’s up to the merchant to setup the type of merchant account they want, but basically for merchants selling physical goods a BuySafe account, and a badge that says so on their shopping cart, assures their customers that the payment is being made into a temporary escrow account and will only be passed on to the merchant after the goods have been delivered satisfactorily.

As a shopper, when you see the BuySafe badge on a merchants Vpayments page, this should assure you that even if you don’t know this merchant and you are not sure if the goods will come or not, BuySafe ensures your money doesn’t go to an unscrupulous merchant. And now to their third type;

What other types of merchants are there?

The third type of merchant is called a Super Merchant. It’s a merchant that signs up other smaller merchants. This comes in hand for sellers that don’t want to go through the process of approaching a bank to setup their own merchant account. Such sellers can just approach a Super Merchant and have their account setup conveniently via them.

A Super Merchant example being worked on right now is a new rent-a-cart service to be launched by Webdev in the coming weeks; basically ‘rent-a-cart’ will allow anyone to have a new domain and have an eCommerce website setup for them immediately and start accepting payments without having to go through the hoops of establishing the standard Vpayments account with a bank. To be a mini-merchant one however still needs a bank account (ordinary bank account) with a bank integrated to Vpayments.

What other things can you do on the ZimSwitch Shared Services platform? 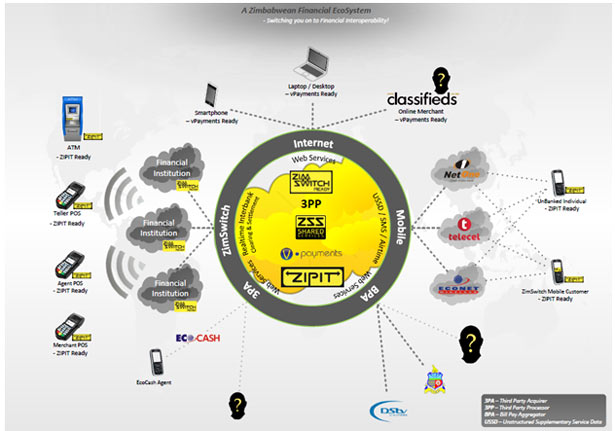 You can download a PDF version of this diagram here. The classifieds.co.zw example of merchant you see there is basically Vpayments solving a payments problem for classifieds in much the same way PayPal did for eBay.

If you have any questions not covered here, please enter them in the comments and we’ll make sure we get the answers for you and possibly update the article with them.