Irate ADSL subscribers around the country have been contacting us to express their anger with TelOne over ADSL internet disconnections that started about 3 weeks ago. The disconnections are part of the TelOne’s migration to a prepaid platform that we first wrote about here on 2 November. The company announced around the end of October via print press adverts that starting November they would migrate all ADSL subscribers to a prepaid billing platform.

It appears however that a lot of their customers didn’t see the announcement and found the disconnections rather sudden. An official announcement in the press today says that all ADSL broadband customers were migrated to the new system on the 27th of October 2012. For some strange reason however, most subscribers were still able to access ADSL services well into late November until they were abruptly disconnected seemingly for no apparent reason.

One subscriber wrote to us:

I’m writing to you as a frustrated ADSL customer and I know I’m one of many disgruntled ADSL customers. I was at the Highlands office this morning and there was havoc.
Over the weekend, many customers got cut off without notice even if your account was up to date. They are then forcing everyone to “top up” whether you have an outstanding balance or not.

This is the message (which I’ve attached to the e mail). How can you also “refuel” if there is no way to do so online?

The attachment in question contained the following message: 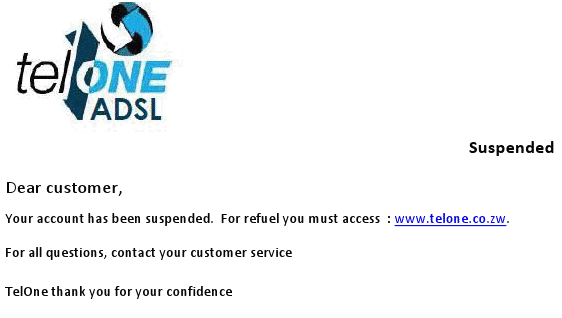 Monday this week thousands of adsl subscribers at TelOne was cut off as the agency unannounced to its users decided to change to pre-paid.

Everybody then had to scramble to TelOne office and pay – but for most of us it took most of Monday to realise that this was the problem.
they said: “oh but we did advertise it in the paper (THE paper?). But I guess very few people saw it”

Other complaints were also posted to the original article we posted on the billing system changeover.

We contacted TelOne but could not get them to say just how serious the issue was. Some contacts at the organisation though defended the organisation saying that customers complaining were mainly those that were not up to date with their ADSL payments, some by as much as 6 months.

TelOne, an organisation owned by the government, is Zimbabwe’s sole fixed line operator. The company has instituted a monopoly on ADSL services and so far provides the lowest priced and one of most stable broadband internet locally. So far the company is bundling ADSL broadband and fixed telephony forcing would be ADSL subscribers to buy telephone services as a prerequisite.

Have you been adversely affected by this changeover?  Please share your experience in the comments.