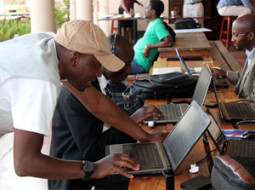 I usually argue on the side of “lack of funding is just an excuse”. If you work hard enough, if you’re solving a real problem, if you’re passionate enough, if you think outside the box etc… But sometimes I wonder if the problem is lack of funding, or if it’s more an issue of young people having so much more to lose if they decide to take the startup route and its high risks. More to lose compared to their counterparts in, say, Europe, the US or Cape Town.

Is it that most young people have come very far to get to the relatively good jobs they have and that there’s so much extended family responsibility and expectation it becomes a really dicey issue venturing into the unknown?

For a lot of young people, not only are they trying to start a company, but they’re also the bread winners for the the extended family. To generalize a bit, this is unlike their counterparts in the west whose parents usually own a decent home and their children can use the family garage to start a startup, or validate their ideas at least.

It’s a system in which, if one blunders chasing an idea that comes to naught, it’s not just them that pay dearly for the failure. It’s their young brother in primary school for whom they pay tuition fees. It’s their parents as well who depend on the $200 he sends them every month. And even for the entrepreneur himself, that one failure could result in the city spitting him out into the midnight train back to the small town where opportunity space is even tighter. Are these realities what keep people grounded to the 8 to 5?

Faced with this, one way to approach it  is to get a very good education, get a very good job and save enough money to take you (and the family) through, say, one and half years of startup uncertainty. The risk here often times is that it’s easy to get addicted to the 8 to 5 rewards especially if the company coats them with that all important company car to make you one of the first members of the extended family to ever own one. It’s an achievement a lot of friends and family will call you crazy for even thinking of leaving.

The other option is to work on the startup as hard as one can at night and dutifully report for the regular job at day and execute so good you still get promoted to get some additional ‘disposable’ income. Leave days and off days (or too-sick-to-come-to-work days) become the precious opportunity to do the day stuff for the startup like physical meetings with prospective customers etc…

There’s another group that has a different problem. It’s the unemployed group. For them the issue is actually that, even armed with a good education there are just no jobs to absorb them in the economy. Companies are closing down so the job market is shrinking. Starting their own venture becomes a means to survive as opposed to having dreams of making it big one day.

But for this group, starting their own venture is still as difficult if not more; Still relying on their parents even for the $1 bus fare into town, their prospects of owning their own computer, let alone a broadband connection, are distant.

They may not even yet have a startup idea to work on that’s going to make them money. But access to resources is still important and access doesn’t come cheap. It is important that they get basic exposure to the tools they could use; a proper PC, a broadband connection and knowledge of development platforms and the possibilities. Of course the power to keep all these things on has clearly become a component that’s not a given as well. It’s a dull picture right? But maybe this is the picture we need to see and find solutions to before we proclaim that lack of funding is just an excuse.

I guess this is why co-working spaces (you can call it a hub, innovation centre, or whatever else you prefer) have been great enablers on the African continent. I imagine they’d have the same effect in Zimbabwe. Of course the resultant benefits won’t be apparent immediately, but slowly they enable more people to access tools, knowledge, a community of similarly venture minded folks and, hopefully, people with money that are prepared to back great ideas & teams.

Is starting a tech startup just too costly for us? How can we lower these barriers?

51 thoughts on “Is starting a tech startup just too costly for us?”