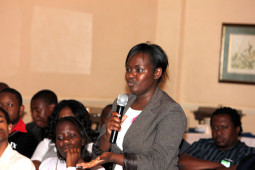 Last week, the final Jumpstart event of the year was held at Cresta Jameson in Harare. The event was a panel discussion where we invited some of the judges of our annual Jumpstart Challenge (it’s just in the second year actually) and local telecoms executives from Econet, the largest telecoms operator in Zimbabwe. The event was sponsored by ZOL.

So we had David Behr, the Founder and CEO of ZOL, Matthew Masiyazi, an Econet technical executive in the EcoCash and Mobile Commerce department, and Spencer the Head of Value Added Services at Econet. The moderator was myself.

Mobile as an opportunity for startups

The discussion kicked off with the question on whether the opportunities of mobile platforms for young entrepreneurs are realizable yet locally. That is are young people able to access the platforms (mainly mobile network’s) to create solutions that reach the market. David contributed that the platforms being there is an opportunity in itself but that there are challenges locally that the entrepreneur cannot control himself (or herself) like the state of the economy and the general issue that Zimbabweans don’t have a startup culture yet. “For startups to succeed to you need to have as vibrant an economy as possible.” He said. He explained however that emerging payment platforms like EcoCash and Zimswitch are an opportunity for developers and entrepreneurs as they enable small amount payments for things like apps.

Spencer contributed that the new opportunity is in mobile telecoms companies moving away from the usual Voice and SMS and looking to compete with on value addition. “We want to retain customers and we have to give them value and that is an opportunity for entrepreneurs because that means they can partner us to offer new services.” He disclosed that Econet currently receives about 5 proposal a day from entrepreneurs seeking to partner them but was quick to say only a small percentage of go through to serious consideration because usually the business case of the proposed ideas are not clear.

Matthew (also from Econet) then explained Entrepreneurs looking to partner MNOS need to seriously address the issue of relevance to the local market, and the size of market when the submit proposals. He also noted that when an entrepreneur comes up with an idea for which they want to partner an MNO, they should not just think of addressing their own need but that of the ecosystem i.e. where do the different partners benefit from the service. Matthew reiterated that new mobile money transfer services by both Econet itself and other players present a huge opportunity for entrepreneurs.

On submitting VAS proposal to MNOs

The discussion then went deeper into some of the problems that MNOs find when they review proposals from entrepreneurs.

Spencer contributed that one major issue is that most of the people that approach them are not keen to share details of their proposal because they are afraid the idea is going to be stolen. He said this usually results in them not partnering the entrepreneur because for them to consider a proposal, they have to look at the detailed business case. He also explained that as an organisation they are willing to sign Non-Disclosure Agreements and that at an ethical level, they don’t even consider stealing ideas.

Mathew then added that security is an important thing for them especially for applications using data as opposed to USSD and SMS. He said proposal that come to them have to have the security component well thought out and usually this is lacking.

On the issues of ideas being stolen and startups requesting signed NDAs before they discuss details David contributed that ideas are overrated at the expense of teams. He explained that most investors and partners are interested in backing the team and not the idea. “The team is far much bigger than the actual idea. I’d be truly amazed if someone came up with a completely new idea. It’s usually a twist on an existing idea. The team is key; let’s get away from worrying about ideas and focus on the teams.

A member of the audience the suggested that part of the problem is that the mobile networks want the ideas proposed to them to be relevant to their MNO so that they can do revenue splits with the startup at a value added service level.  He said this approach kills good ideas that are relevant to the MNOs business.  He suggested that networks need to open up the USSD gateways and SMPP  platforms so that people just buy an account and do whatever they want on it. This model he said, has worked very well in markets like South Africa where there are mobile value added service aggregators.

Matthew responded that Value Added Services Providers will be emerging but that such players also need capacity to take in the risks of being one so it’s also a very expensive venture to get into. He however explained that this opportunity is not well known and therefore not being taken full advantage of by possible VAS platform providers.

A tech hub for Zimbabwe

The issue of Zimbabwe needing startup incubators and a hub then came up as a contribution from the audience.  The panelists agreed that a hub is needed but indicated that any such initiative require commitment beyond just funding for it.

A suggestion was also made that the local tech corporations should consider supporting a hub as these result in entrepreneurs, and startups that are likely to succeed, a benefit that has spillover effects on the bottom line of the companies when they partner these startups.

The internet as a global market opportunity

Another question presented to the panelists was whether entrepreneurs should look at the global audience that the internet avails or to focus more on the local market. David contributed that there’s technical nothing stopping an entrepreneur from building solutions for a global audience but that solving local problems is a much more viable route. “I don’t think the odds are in your favour for a lot of reasons and you would throw away the uniqueness of being in Zim as there a lot of local opportunities to address here first.” He explained.  “If you are sitting in Zimbabwe you can see how the market is developing and you can leverage that experience in a way that someone outside Zimbabwe cannot do” he added.

David noted that Zimbabweans also have a unique position where there is a lot of unused outgoing bandwidth in Zimbabwe which means web entrepreneurs can host services in Zimbabwe for a Zim audience but also serve a global market inexpensively. As a company he said ZOL is committed talking to local entrepreneurs that have ideas requiring a lot of outgoing bandwidth and would like to some hosting.

Spencer also contributed “before you go out and conquer the world, there are opportunities right here in front of you to exploit and then expand beyond borders from there.

Here are some more photos from the event:

4 thoughts on “Report: The Jumpstart Panel Discussion on Tech Entrepreneurship”