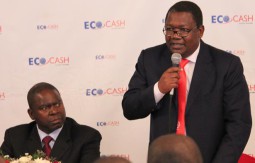 Today we attended a press briefing where Econet Wireless Zimbabwe and CBZ Bank announced a new mobile banking direct partnership. The partnership basically entails that EcoCash subscribers who bank with CBZ can now move money between their EcoCash mobile money wallet and their traditional bank account from their mobile phones. Users of the service can also check the bank balance and get a mini statement all via EcoCash.

The value on the banking side is that where a bank customer used to need to physically go to the bank to withdraw money (or find an ATM or POS terminal) they can now use EcoCash agents as a new cash withdrawal channel. On the EcoCash side, subscribers that bank with CBZ don’t need to find an agent anymore to money into their EcoCash wallet as they can do it directly on their phones, anytime.

The tariffs levied on EcoCash users are structured like so: a wallet to bank transfer is treated as a normal EcoCash cash out (from the wallet) and the normal cash out tariff applies, which is 2% with a maximum cap of $6. Bank to wallet, balance inquiry and mini statement inquiry are all free of charge.

Econet said in a press release sent out today that 4 more banks will be connected before the end of the week.

What we find interesting about the development is that the integration is happening directly between Econet and the bank. We would of course have expected it to happen more efficiently between Econet and Zimswitch. Zimswitch, as you may know, already has a platform that currently connects most of the banks (banks accounting for 95% of the roughly 1.5 million traditional bank accounts in Zimbabwe) to the mobile networks allowing banked individuals to transfer money between the banks and, more importantly, to send money to any unbanked individual that has a mobile phone. CBZ Bank is a member of Zimswitch.

Even more interesting is the fact that this approach Econet is using – to negotiate with each bank directly and separately to have their banking systems talking to EcoCash – is what Telecel tried and failed it, eventually deciding to hand over the mobile money hassles to Zimswitch. The key difference is that Econet is doing it as (let’s call it) phase 2 of their mobile money roll-out. They amassed some 1.7 million EcoCash users first and then went to the banks with the attractive offer. Telecel did it the other way round; they went with nothing to the banks. And it didn’t work.

There are indications Zimswitch itself has been trying to get this connectivity to EcoCash to allow banked individuals on the Zimswitch platform to transfer money to EcoCash accounts, but so far it hasn’t happened yet. We’re guessing CBZ decided that if Zimswitch is finding it difficult to give them access to Econet’s attractive EcoCash subscriber base (one clearly much larger than all the banked individuals in the country), they’d just go ahead and do it directly.

Today at the press conference we asked the CBZ Bank Executive Director, Colin Chimutsa, if the new direct partnership with Econet is a parallel effort to what they are already doing as a Zimswitch member bank, seeing that the functionality being launched is somewhat similar to what’s already available on the Zimswitch platform. In response he said that he is not aware the Zimswitch platform allows banked individuals to transfer money to mobile phones of the unbanked. According to him, the only functionality he’s aware of is that of transfers between banked individuals. We have no idea how he wouldn’t know of-course, and a side conversation with another CBZ representative at the event yield nothing inspiring confidence.

Maybe CBZ treats this as them buying two POS machines from two different device manufacturers; that what matters to them is reaching those 1.7 million EcoCash subscribers regardless of the route they do it. That Zimswitch being rendered redundant in as far as that type of money transfer is concerned is not their issue. Chimutsa explained in the exchange that to them as a bank, broadening their offering is what is important and that “the results will speak for themselves.”

13 thoughts on “While Zimswitch waits, Econet chooses to partner banks directly with EcoCash”