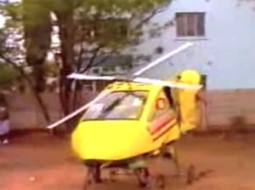 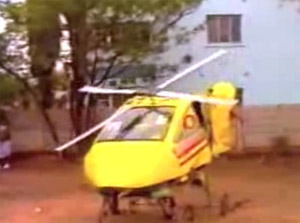 We just got pointed to this YouTube video of a Bulawayo man called Barnabas Sibanda who apparently built a helicopter prototype and was raising, back then in 1994, funds to start a helicopter factory. He is ofcourse not the first Zimbabwean guy to attempt taking to the skies in his own machine. If his words are anything to go by however, unlike other such attempts his helicopter actually flew. About 65kms apparently.

Whether he did fly it or not, you still gotta admire this guy’s daring craziness. A helicopter factory! His objective was simple:

Considering the video was shot in 1994, we can only conclude his dream never took off (or hasn’t yet). Otherwise Zim military would be flying “Made in Zimbabwe” helicopters by now.

Here’s the video below. We’re still trying to decide who was funnier, the news/publicist guy or Sibanda himself.

25 thoughts on “Bulawayo helicopter man. Here’s to the crazy ones!”