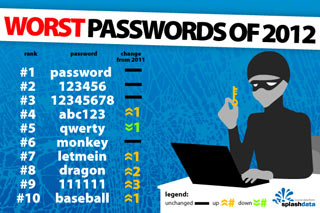 During my brief stint in IT one of the most common complaints was that my password complexity restrictions were too stringent. People had to come up with a password they could remember and “+.^_]$”9lQd@7fW” does not cut the list. When I refused to budge the lady who was PA to the General Manager reported me to her boss who called me for a chat in his office. He simply could not understand why the word password itself could not be a password. Long story short I was forced to back down on my restrictions.

It was my unjustified hope that, amidst all those plentiful digital devices (tablets, smartphones, gaming consoles, plug computers and whatnot), people would have improved their password making skills by now, it turns out that people are still indolent as ever. Just take a look at the most popular (the worst) passwords of 2012. They are terribly predictable.

The rankings were created by SplashData who gathered the data from the millions of stolen passwords posted online by hackers in 2012 and ranked them in order of popularity. Password is still firmly on the throne (our PA still uses it as well I imagine) but the at the we have new entrants in the form of Jesus and password1. God does work in mysterious ways but I doubt even He approves and thumps up for Facebook for demanding you add a number to your password!

Time to hit Oprah’s couch people. Are you surprised that you or your co-worker or  friend or girlfriend (I am no misogynist, just being honest here. Women top the worst password list) did not make the list. Also what should be the way forward biometric authentication, Two Factor authentication or OTF?