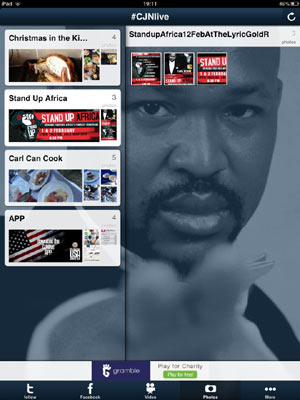 We didn’t know about version 1 but we’ve just been notified of the second version of Carl Joshua Ncube’s app and after briefly checking it out, we loved it. Well, the Android version that we used at least. There’s an iPhone (and other iDevices) and Windows Phone version of the app as well.

It’s all content on CJN in one place to make him more accessible. The app features his Facebook page updates, Twitter and YouTube channel, as well as photo galleries to give Carl’s fans insight into what the he is doing at significant points. Fans will also be able to see where he is when he’s touring and will be able to contact him via the app.

The app does have a direct commercial angle to it. It will have in-app advertising and a dedicated promotions section. “My comedy exposes me to audiences and my material is directed at selling Zimbabwe and Zimbabwean brands through my art form,” he explained to us.

Carl is of course not new to media and tech. Other than comedy, the guy has a decade of advertising, television, design and programming experience under his belt. He is credited as the first animator to make a short film at the Zimbabwe International Film Festival Short Film project.

The app Carl says, will play its part in encouraging people to start using certain communications devices and push more services from ISPs to make the internet experience in Zimbabwe a little better and a bit more affordable. Hopefully other artists also see the opportunity to use new media platforms to get their products to market.

Carl’s app can be downloaded free from the comedian’s website, www.carljoshuancube.com.