Today we woke up to the tip that the website of one of the largest internet service providers in the country, Zimbabwe Online (ZOL) had been hacked. Checking the website, we got the screenshot below: 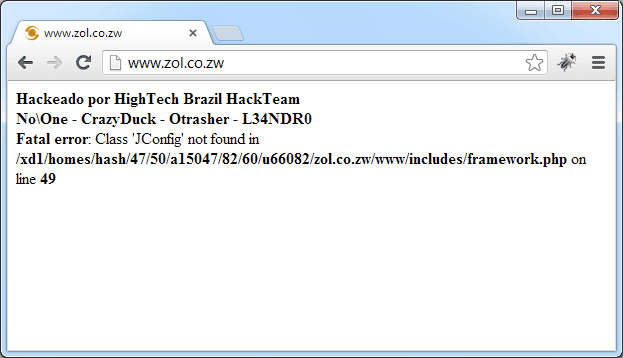 From the message on the website, the hack was apparently done by a Brazilian group called “HighTech Brazil HackTeam”.  The group is reported to have delivered a flood of attacks on hundreds of websites worldwide.

The hacking of the ZOL website, like other hacks of company websites in previous weeks, does not appear targeted at the company, and the effect is likely not more than the defacement itself. It’s surprising however that an ISP’s website would get hit randomly like this. You’d expect them to have tight web and internet security in place to avoid such attacks.

The ZOL website uses the Joomla content management system (and no, we’re not implying Joomla is to blame).  We have noticed that attempts to restore the website are going on but not completed as it’s currently giving off errors like the one below: