For those not familiar with the name Jeff Atwood, he is the co-founder of Stack Overflow and Stack Exchange, the former being arguably the best computer programming Q&A site on the interwebs. After establishing the site into the success it is today, Atwood left the company to focus on another problem he had identified with one of the internet’s old technologies: Forums.

About forums and the problem…

After working at it for about a year with his team, he is back with a new open source project (called Discourse) that aims to reinvent and modernize internet forums which have been in existence since around 1994. On his personal blog, Atwood argues that forums have largely retained the same outdated functionality and ugly look of the original forum software of the nineties. And he is right, forums have not kept up with the rest of the web and remain a pain to browse and read through though they are an important part of the internet for all the communities that use them to share and discuss a dizzying array of (sometimes esoteric) topics. 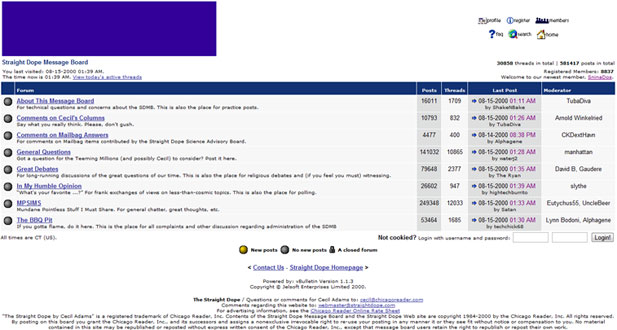 The above image shows the look that we have been met with over the last decade or so when visiting forums. It is archaic and not exactly what I would call user friendly. Cleary, we need something that’s easier one the eyes.

On their About page, the team says they want Discourse to do for the forums what WordPress did for the blogs. And after playing around with the tryout site one can see why they can make such bold claims, Discourse is awesome. What it does, basically, is beautify forums and make them fun and more intuitive to use. It is refreshingly simple and elegant to use. Below are some of the features you can expect:

This list is by no means exhaustive as some of the nicer tidbits and attention to detail incorporated into the site are difficult to describe in words. Also, although some of these features are not unique to Discourse, it is the execution and implementation that makes them stand out. Visit the site and give it try. I think you’ll love it, as I did.

7 thoughts on “Discourse: A reinvention of web forums”