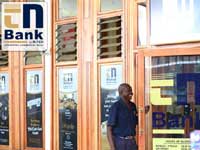 Econet has said previously that it acquired the bank to drive adoption of its telecoms products and today reiterated its desire to introduce a new model of banking that leverages the telecoms operations. Part of that new model of business is the financing of smartphones that Econet announced last month.

Here’s the full release below:

Econet Wireless has appointed Mr Kwanele Ngwenya, a South African who was heading the operations of First National Bank (FNB) in Botswana, as the new CEO of TN Bank.

Mr Ngwenya, a veteran banker, was head hunted by an international agency after Econet decided that it wants to turn TN Bank into one of the leading banks in the country. The telecoms operator wants to introduce a new model of banking in the country which uses the synergies of its telecoms business.

Econet has already made sweeping changes at the bank, after taking control a few months ago. Changes have already been made at board level, after the resignation from the bank’s board of founder, Mr Tawanda Nyambirai, in December last year. A new team of international bankers have been brought onto the bank’s board.

Also gone from the bank are almost all the key former executives, including former CEO George Nyashanu, who has been re-assigned within Econet Wireless Services.