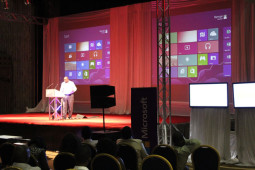 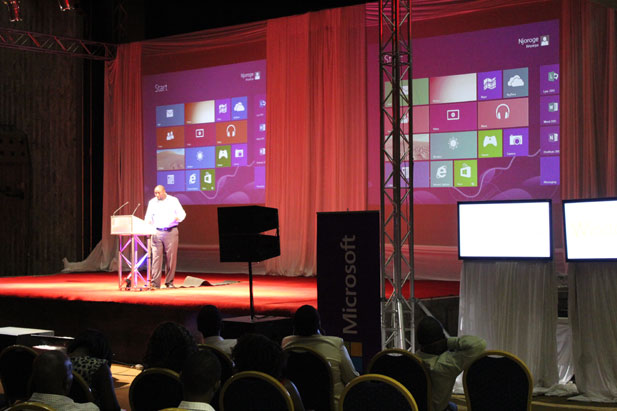 Microsoft officially launched the latest version of its operating system, Windows 8, in Harare today.  The company also introduced Windows Server 2012, Office 13 and the Microsoft 4Afrika initiative among other things. The launch was officially opened by Zimbabwe’s ICT Minister Nelson Chamisa.

The new Windows version has already been launched in other markets on the continent starting October 2012. In Zimbabwe, Microsoft sells its products through channel partners.  Microsoft wouldn’t give any specifics on pricing just indicating that it would be around US $300. One Microsoft partner we interviewed today, WestChase Consultants, told us they are looking to sell the Windows 8 Pro would be priced at about $375.

Other Microsoft partners at the event also told us they will be stocking Microsoft Surface tablets to widen their offering of the companies products.

Speaking at the launch, both Chamisa and the ICT ministry Perm sec, Sam Kundishora acknowledged the problem of software piracy in Zimbabwe, which includes piracy of Microsoft products. “As a country we have been accused of pirating software. It is true we cannot deny it. We are putting our heads together as government, the ICT Suppliers Association of Zimbabwe, the Computer Society of Zimbabwe and Microsoft to sensitize and create awareness of the bad effects of piracy,” Kundishora said at the launch.

On the issue, Chamisa added, “From the rankings that were done by the Business Software Alliance in terms of software piracy, our country is not faring well and it’s a source of concern for us policy makers.” The minister went on to say that as government they were working to have an MOU with companies like Microsoft that will help them implement awareness programs as well as to enforce anti-piracy laws. Chamisa however encouraged Microsoft to come up with friendly pricing terms for emerging market countries like Zimbabwe.

Responding to the issue of piracy and pricing Microsoft East and Southern Africa General manager, Eric Odipo, said while he appreciated the challenges customers have accessing their products , one problem they had noticed is that customers don’t take advantage of the different levels that Microsoft products come at. “If you take Office for example, many people tend to buy the most expensive Office product, when in reality they might not use a number of programs that come with it,” he explained. “Office Professional comes with Publisher, Access and Outlook which many people will never use”

Odipo said however that they offer special low pricing for academic institutions. He also said customers have an option to buy software on “hire purchase” where someone can buy software over say, 3 years.

Here are some pictures we took at the event: