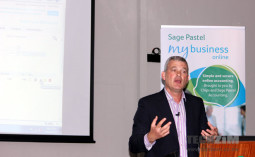 Yesterday we attended a press briefing where Pastel (Both the local distributor, Chips, and South Africa) and Utande announced the launch of Sage Pastel My Business. The actual launch is today so yesterday was dedicated purely to showing journos why the new accounting in the cloud, is a big deal.

And that they did! We know we walked out of there feeling this was at last a software solution that matches the advances in local connectivity. it also simplifies stuff though about so far is thought of as belonging to established businesses and operated by specialist accounting people. Add to that the fact that unlike numerous other cloud accounting solutions available on the internet, this is pre-configured for the Zimbabwean accounting and tax environment. And all that for $20 a month! We think it’s a great deal for startups.

Back to the actual briefing; it was attended by Softline Pastel MD Stephen Cohen, another SA executive called Rutendo Hwindigwi, Chips MD Rob Watson, and the Utande leadership.

Like us, you probably already read the press releases sent out in advance of this launch, so we’ll dive right in and break down the stuff that we found most interesting and questions people likely have. If you have a question not answered here then let us know in the comments and we’ll get the info.

Cohen explained that this should be the least of anyone’s worry as there’s data intensive heavy components the site uses. He compared it to 2 pages of emails and Utande added that a typical page would be about 16kbs of data.

How much does it cost exactly and why that amount?

The full pricing is on the website but basically you pay $20 a month and get 2 users, 2 companies, and 1 GB of data. Watson said the price is pegged to the South African (where they source the app) Rand so it may fluctuate depending.

How does the payment work

Utande says they’ll have a ZimSwitch Vpayments enabled for customers to pay like they do with their uMax product. So once the first free month expires, the users doesn’t need to physically go to a bank or Chips to pay. That options is available ofcourse.

What about data migration to it

The application accepts CSV imports but you will have to figure out how to set the data fields accordingly. In short there are no conversion tools for other accounting packages that you may be using. Watson said though that those using the offline version of Pastel will however have a conversion tool available to them in in a few weeks.

Can you take backups and store them on my local computer in case the Utande data center fails?

You can take backups but Utande insisted that all data is already backup in real time and if anything would happen to their Harare data center, a South African based mirror would serve users the system. Cohen clarified that the offline backup you take is basically a backup to excel and not restorable back into the system. He however said that you will never need to restore a backup because everything is automatically backed up from the cloud already.

Can you use it on a mobile device

Right now you can get an Android application and Cohen says they are building other applications for Apple and Windows mobile devices. They are only developing for smartphones though in terms of applications but nothing stops you from using the web version on a mobile device. In fact, those that do try this, please let us know.

Cohen added that even though they have these mobile apps they are building, they still won’t have the whole Sage My Business on the app; it’l be specific components of the application like invoicing.

According to Cohen, their offering is built for enterprise heavy stuff like SAP, so features were built with the startup in mind but with enough sophistication for businesses that want to have their accounts handled by professional accountants. Watson added that their pricing was significantly lower than that of Cumulus; $20 vs $125.