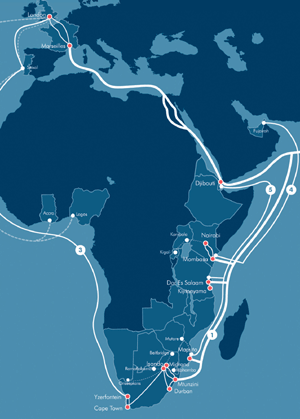 If you’re still experiencing slow and intermittent drops of connectivity even after SEACOM announced yesterday that they restoration was complete, it’s because there’s a new failure. Apparently, one of the cables they had restored some traffic to, one called SEA-ME-WE 4, has also failed.

SEACOM posted the update this morning on their website and social media pages. The SMW4 cable suffered a failure off the coast of Egypt.

Since SEACOM is working with other providers to restore connectivity on alternative routes, it’s possible that other cables (like EASSy) that were affected by the first cable break on 22 March, have also been affected this time.

In Zimbabwe, internet services have once again slowed down significantly, after only one day of relief. Users of internet services, both fixed and mobile broadband, have reported a slowdown of traffic since early morning. It’s not clear how long restoration from this new failure will be completed. It will however be weeks (2 at least since last Friday) until the first failure has been fixed.

Here’s the full update from SEACOM:

SEACOM can confirm that at 06:20 GMT 27 March, the SMW4 cable system suffered a cable cut off the coast of Egypt. Earlier this morning, SEACOM had restored all services on both SMW4 and IMEWE cable systems.

SEACOM is currently in the process of prioritizing and reallocating already available capacity for customers and sourcing further capacity to re-establish full restoration.

We will update further as information becomes available.