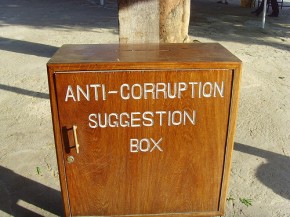 News has reached us that those we have tasked with fighting corruption are in fact themselves corrupt. This coupled with the fact that me and a couple of hundred other people were asked to contribute a dollar each, ostensibly for a ZESA team’s transport, after a transformer blew up in my area can be considered the inspiration for this article.That got me thinking wouldn’t there be reduction in corruption if people paid their ZESA bills online or using their cellphone.

We live in country were corruption is rife: police taking bribes at roadblocks, ZIMRA officers at tollgates and borders, government officials in public offices etc. There is an age old adage “Who watches the watchmen?” With the emergence of the global village a solution has presented itself: Use technology to expose them to the threat of moral sanction.

With the rise in use of smartphones people should fight back against this injustice by photographing and videotaping the culprits in action and upload their photos/videos to sites like YouTube, Facebook and Instagram.com. Captions could be used on photos to name them and shame them. I doubt these corrupt individuals will get to keep their jobs once their dark deeds have been brought to light.

For reasons best known to themselves, government agencies continue to resist the implementation of technology in their departments. For example ZIMRA could use E-tolling system will eliminate corruption at toll gates and this would result in more money reaching the Consolidated Fund. This also ensures that an audit trail (and lots of useful data) is created thus thwarting corruption on other levels too.

The use of cameras at roadblocks to record police conduct will go a long way in eliminating corruption. Indeed one of the reasons for ubiquitous roadblocks is because police officers make a killing asking for bribes at each site. Cameras should also be placed in public offices like the National Registry, Hospitals, Pension Offices and at toll gates.

So far the largest problem stems from fragmented efforts to fight against corruption. In an effort to provide a centralized platform, a local developer, Tawanda Kembo set up ipaidabribe.org.zw, an attempt at what has been successful in other developing markets, like India and Kenya. Such efforts are to be applauded though the greatest concern remaining is exposure and popularity of the site to the public. I would recommend the creation of a Facebook page that is dedicated to fighting corruption in Zimbabwe. Facebook is already a top site destination in Zimbabwe so it would save people the effort of trying to popularize the site by leveraging existing social communities.

The other problems are indifference from the authorities and fear of retribution. Up to now, the Zimbabwe Anti-corruption Commission is yet to make any impact despite it being a platitude that corruption is everywhere. If corrupt acts and the names of the individuals involved are brought to the frontline instead of being hidden in midnight emails to ‘tip-offs anonymous’ then maybe those tasked with governance will be mortified into action.

There is an Ethiopian proverb: When the webs of the spider join, they can trap a lion. Technology levels the field, let us use it. So what say you?