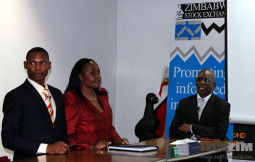 Zimbabwe Stock Exchange Acting CEO, Martin Matanda speaking at the launch of the ZSE website. On his right is ZSE Chairperson, Eve Gadzikwa, and a Big Law head of customer services, Albert Nyarugwe.

We’re just from a Zimbabwe Stock Exchange (ZSE) event where the local exchange was launching a web portal. The new website comes online after close to 2 years of being down. From our first impressions we almost want to say the wait was worth it, which we shouldn’t say because 2 years is a long long time.

But the website is that; really impressive. And its not about design – the design is really good as well by the way – but its about information being available to people that need it. Freely.  The website is  loaded with lots of useful information that makes it so easy to track what’s going on in terms of the financials of listed companies. You can drill down on each company and get more details like it’s annual reports, graphs of its movement over a period, latest news on the counter, information on shares issued, the company’s executives, other companies related to it, and lots of other stuff.

All the information is available free to anyone. ZSE executives speaking at the launch today said making all this information freely available is unprecedented on the continent as other bourses charge for the detailed information on listed companies.

There’s also new social media integration. The ZSE’s Twitter account is active right now with over 1,200 tweets made already. Speaking at today’s launch,  ZSE acting CEO Martin Matanda said he believes the role of social media in the ZSE’s new initiative is critical. “Twitter and Facebook are being used to interact with all stakeholders, enabling the ZSE to communicate and receive feedback from anywhere in the world with immediate information dissemination.” he said.

He conceded that the ZSE is not approaching this assuming everything will be smooth; “there is no doubt that we are new to this and will learn from it so our disclosure policy is expected to evolve according to our experiences,” he explained.

Matanda also indicated that they will have an API for organisations that want to connect to the ZSE’s data store. They will however charge a small fee for such access.

One small drawback we noticed is that the website is not mobile friendly, which means it’ll be relatively cumbersome for someone viewing it from a phone or small tablet. It’s still in beta, so maybe an improvement is coming down the load.

The website itself was developed by a local web development company called Big Law. They have developed investor relations website for a number of listed companies locally, so you could say they have experience in this kind of thing. It looks like Big Law will be managing the website for ZSE onward. On this Matanda said there will be some training of ZSE staff to enable them to do the website themselves but didn’t say how long this would take.