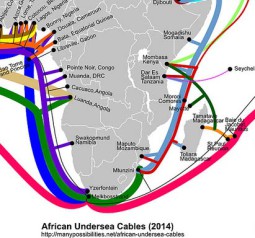 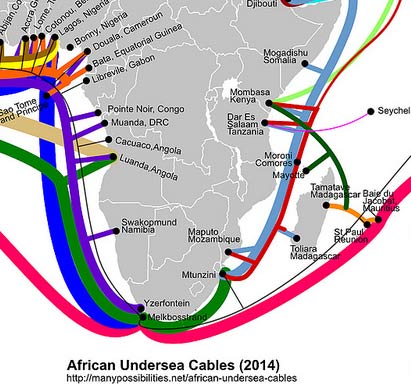 Zimbabwean internet providers relying on the onward fibre connectivity of SEACOM and EASSy, two of Africa’s major undersea cables, are facing major problems delivering internet services to customers as the the two cables have been down for close to 4 days. According to reports, the cables were apparently severed by ship anchors between Egypt and Marseilles on the morning on Friday 22 March .

SEACOM confirmed today via posts on their website and Facebook. “SEACOM continues to work to restore transmission customers across the Mediterranean Sea” said the update on their site. There’s so far no confirmation from EASSy on what exactly is wrong on their side, but we have sent them a request for the information. So far however what is definite is that they too have been affected by the outage.

In Zimbabwe, TelOne, Liquid Telecom, Dandemutande and Africom all bring in international bandwidth via either of the undersea cables. TelOne is via EASSy and the others feed mainly from SEACOM. Another fibre operator, PowerTel gets its internet from the WACS cable along Africa’s west coast. Some of the internet brought in by these operators is further sold to other providers in the country like ZOL, YoAfrica, iWayAfrica, Africa Online, Telecontract, Econet, NetOne and Telecel.

While just SEACOM and EASSy have been affected directly by the cable outage, all operators are likely being affected as the rerouted traffic is an unexpected surge in demand.

In an email to clients today, Dandemutande CTO, Collin Franco assured clients that the company was doing all it can to deliver quality internet. “Since full repair of this fault is likely to take approximately two weeks we have procured alternative connectivity across the Mediterranean Sea using a cable system that was not affected. The cost of this alternative path will be borne by us.”  he acknowledged however that their efforts are “in a long line of activations requested by many carriers (many hundreds of Gbps) and is not progressing at the rate” they need. Franco says as a result of the delays, they are also looking for other alternative stop gap connections.

An executive at PowerTel has told us today that they have received numerous requests from local ISPs and clients looking to have their internet supplied by the operator during this downtime. “I have numerous requests right now that I’m approving,” said the executive, “we have not been affected by the outage because our suppliers in Botswana use the WACS cable which is up and delivering normally”. The additional demand from the other providers is however likely to affect their internet quality too.

We also contacted ZOL CEO and Liquid Telecoms executive director, David Behr, and he told us that they too were operating with a loss of capacity due to the SEAMCOM problems. He explained however that Liquid already has redundant links via WACS and SAT-3 and that they are able to weather such outages by rerouting their traffic. “Fortunately Liquid Telecom and ZOL are in a unique situation in Zimbabwe thanks to the fact that we also buy capacity on the two major west coast undersea cables – WACS and SAT-3.  By operating over all 4 undersea cables we are able to mitigate against these disasters,” explained Behr.

Behr added that as they own and operate their own cables and buy dedicated capacity directly to Europe from the undersea cable operators; “we are not reliant on having to deal with 3rd parties in the middle – giving us faster response time to these unfortunate cable breaks because we operate the end-to-end capacity ourselves.”

Contacted for comment, a TelOne executive expressed that they were not having any issues at all with their ADSL service. They however promised to find out more information from their technical department but had not come back to us by the time we hit the publish button. Several of their customers however had indicated that the service has been quite slow since Friday.

What has been your internet experience over the past few days? Has your provider communicated what the problem is and how they are fixing it? Please share in the comments below.