Brodacom’s base stations to go under the hammer 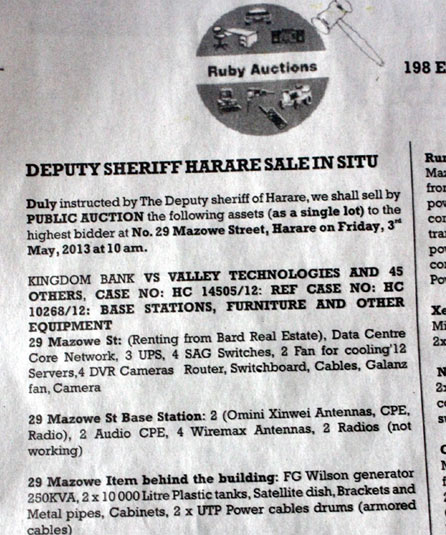 Last we wrote about Brodacom in January this year, it had emerged that Kingdom Bank had secured an order to acquire Brodacom’s assets over an unpaid debt. Kingdom Bank was apparently keen to recover a $20 million loan from Valley Technologies. The matter re-emerged last week with a public notice in the local press announcing that the company‘s assets will basically be under the hammer this Friday as a result of the Kingdom vs Valley dispute.

Assets being auctioned include base transceiver stations, generators, switches, routers and other telecommunications equipment. We counted at least 27 base stations in Harare, Chitungwiza, Bulawayo and Mutare that are part of the stuff being auctioned. See part of the notice in the image below:

Brodacom the company is actually actively providing services, and sources tell us internet services will likely continue uninterrupted as the intention is to sell “the whole thing” in its working state. Hence the “as a single lot” bold text in the notice. The whole thing may (we’re just not sure) therefore just mean that Brodacom is under the hammer.

A source also told us the move to put Brodacom’s assets under the hammer may be a clever way out of dealing with some unpaid liabilities of the company. An example being more than a year of unpaid salaries owed to employees.

Note: the notice is in last Friday’s Herald on page C10.