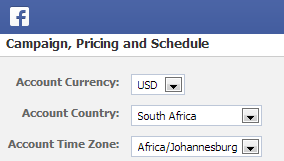 If you have tried to target Zimbabweans with Facebook ads in the past, (because social is king of audience numbers right now, and Facebook is right there at the top) you probably found, much to your disappointment, that Facebook wouldn’t let it. See, you could not target Zimbabwe as a location for your adverts on Facebook. Sanctions it was, apparently. Double standards we called it.

Well, Facebook is easing on that. Now you can. If you are in Zimbabwe, you might have noticed over the past week or so, that adverts are starting to show up on the right side panel of the web site. The same way they would if you used Facebook from outside the country. That’s because advertisers can now target you.

We notice however that Zimbabwe is still not an option on the “Account Country” selection but we’re sure this is a much easier hurdle to go around. We’re not sure why this is so. Could it be Facebook means to only allow people outside Zim to target Zimbabweans?

They’ll also be the credit card issue for most advertisers, with Zim issued credit cards either too difficult to get, or just an issue to use on the net. Yes, those locally issued prepaid debit cards are not accepted on many websites especially US based ones. But then, again, that’s an easier hurdle to go around.

A mistake some will make after knowing this is to rush in for this latest possibility. Facebook is not the only advertising path on the net. There are still many options ,the obvious one to mention being Google Adwords. There are local ad marketplaces emerging as well. Local design company, C2 Media, have created adz; there’s SpryAds created by some local entrepreneurs which is still in beta; and there’s FaraiMedia, which we’ve used here for some of our inventory.

Ultimately, which platform you use is a decision driven by your objectives and the opportunity each platform avails, which should in turn drive a placement strategy.