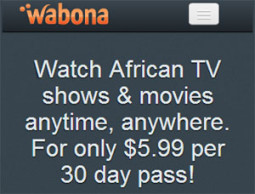 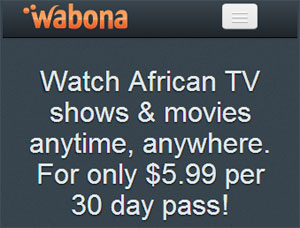 Wabona, a South African based online move startup founded by two Zimbabwean last year has moved from a per movie payment model to a monthly subscription based one. In an email to their customers, co-founders Simba Mabasha and Simukayi Makuna announced the change over the weekend.

Users of the service will now be charged a US $5.99 all-you-can-eat monthly fee. Previously, the service was based on credit vouchers whose value would be deducted per each movie watched.

The change comes along with a redesign of the site and addition of some new movies. The new movies include those from West Africa, specifically Cameroonian. There’s still noticeably not many movies though on the site; a total of 23 as far as we could tell.

When we communicated with the startup over email last month we expressed concern whether there was enough digital content outside of West Africa, and Mukuna said there’s increasingly more content from east and southern Africa. Seeing however that they have now moved to West Africa this may mean there’s either not enough internet ready content in the South and Eastern Africa, or the rights are harder to secure.

Wabona competes with iROKOtv (Nigerian-based), Buni TV (Kenya based), AfricaFilms.tv (France based) amoung other smaller players.