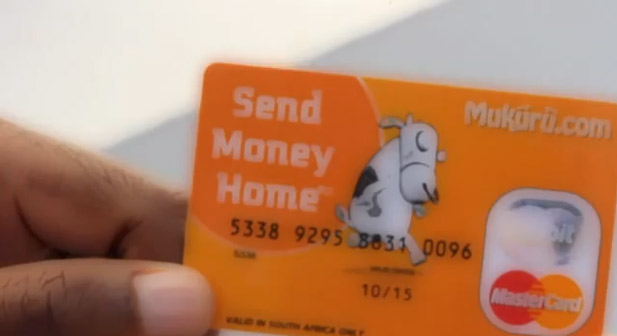 Mukuru.com has just announced the launch of a new cellphone based debit card in South Africa. It is something like mobile banking services locally, except this is optimised for existing Mukuru services in addition to using the card for regular banking and point of sale. The new card is backed by Standard Bank.

According to a video posted on YouTube, the new product addresses the need by migrants to have regular bank accounts in South Africa. Migrants, apparently, find it hard to ‘open’ a bank account in SA, which then makes it difficult to transfer money securely to relatives in the greater Southern Africa region.

The new debit card costs R25 and an account can be opened at Inter Africa stores in South Africa. Mukuru services available through the card include regional remittances via a cellphone. Using a mobile phone to transact, the video says, is actually available to Mukuru customers already even without the debit card. In Africa, so far Mukuru customers are able to send money to Zimbabwe, Malawi, Zambia and Nigeria.

In Zimbabwe recipients can collect their money countrywide at banks like CABS, CBZ and Banc ABC, as well as standalone Mukuru pay-out partners.

Started as a convenient way for Zimbabweans in the Diaspora to send commodities to their families back home in Zimbabwe, Mukuru evolved after Zimbabwe’s hyperinflation era into a fully fledged international money remittance service with a special focus on recipients in emerging markets of Africa and South America.