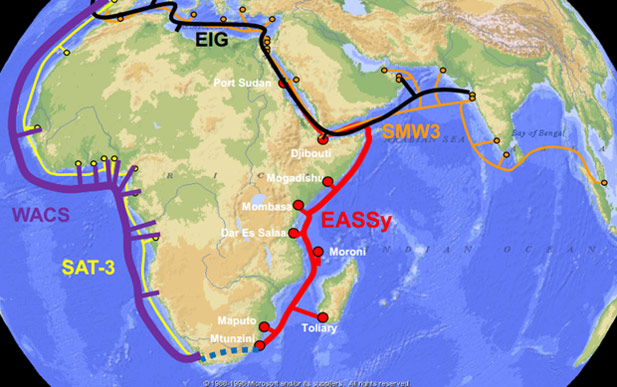 The EASSy undersea cable runs across Africa’s Eastern coastline and its largest shareholder is the WIOCC Consortium that includes Zimbabwe’s Telone. It was commissioned in July 2010 and covers a total footprint of over 10,000km, delivers connectivity to 20 African countries and provides 4.7 Tbps of bandwidth. As with the SEACOM, TEAMS and LION cables, its arrival has led to an unprecedented decline of costs related to broadband internet access in host countries. This is for the first time opening up access to many land-locked countries in Africa’s interior – specifically: 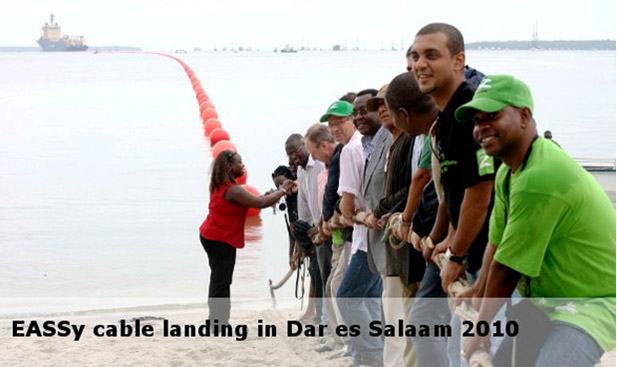 WIOCC is able to mitigate fibre break challenges as frequently experienced around the Suez Canal area by routing traffic to the WACS ( it has also invested in this cable) and SAT3 cables on Africa’s Western coastline, as well as to other cables. In a forward looking series in WIOCC’s newsletter and concerning the impact of broadband internet to the continent over the next 3 years; Mike Last, EASSy’s director of of International Business Development Had the following to say:

Three years ago, I suspect very few would have been bold enough to predict the revolution that has taken place in Africa’s ICT sector. The improvements in the continent’s international and terrestrial connectivity and availability of bandwidth are truly staggering. Predicting the future always involves an element of crystal-ball gazing alongside statistical analysis. In considering the extent of technological developments and their social and economic impact over the next three years, our panelists have highlighted a number of potential challenges.

If successfully addressed, Africa will surely be well positioned to become a more powerful influence on world markets. The critical, constraining issue at the moment is, we believe, the limited reach,

reliability and affordability of terrestrial connectivity. However, this will change, with Paul Hamilton’s research indicating that within three years there will be around 610,000km of live terrestrial fibre across the continent – an increase of almost 40% over today’s network – finally connecting all but one of Africa’s capital cities to submarine cable. These new deployments will bring improved reach, greater diversity and (in all probability) increasing affordability of high-speed communications to more locations in Africa, thereby creating new opportunities for individuals and businesses.

James Wekesa, (WIOCC’s Chief Commercial Officer) and Martin Mutiiria (WIOCC’s Sales Director) will be presenting at the Broadband Forum in Harare on the 10th of May.