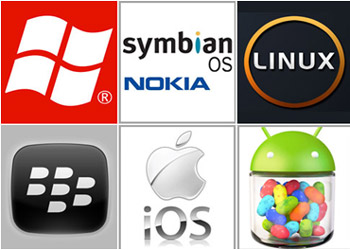 In the previous installment there was a lot of debate and impassioned discussion as people championed whatever their favoured smartphone or smartphone Operating system. We live in a country where some statistics are scarce and so for the most part our arguments were fueled by educated guesses and intuition. Please take time to complete the survey I have designed to help settle the debate and answer some of the questions like:

The survey is completely anonymous but to prevent people from skewing results by taking the survey multiple times you are required to provide your email address. You are however free to campaign for your mobile phone by inviting your friends to vote for it.The closing date will be Wednesday 15 May 2013 at 0000 hours UCT. Results will be published on Friday 17 May.

Meanwhile here are the smartphone global statistics for third quarter 2012 during the just past Christmas season in terms of the most popular mobile operating system:

Fact: Android is the most popular mobile OS even in high end devices which are priced close to some of Apple’s products.

Fact: Nokia’s market share has fallen from 88.5% in the second quarter of 2011 to a mere 20% in the same quarter in 2012. This does only refer to shipments not total phones in use. The fall is due to a number of factors one of which is that Nokia is still transitioning to Windows. I hope that works out.