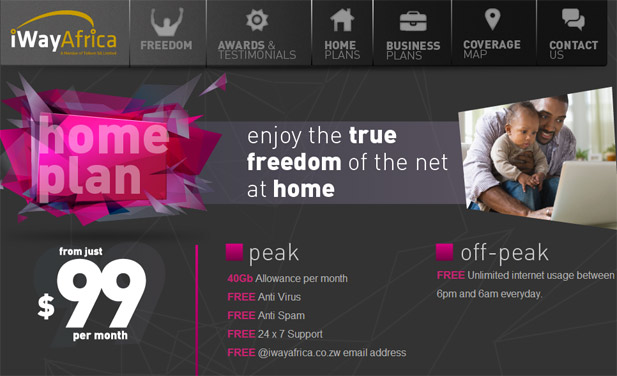 Back in the day, around 2005, the brand Mweb was synonymous with the internet in Zimbabwe. They were the giants. You couldn’t plan getting an internet connection and not think first about Mweb. Them and a few others like ofcourse, like Africa Online. Then Telkom happened, and along with it, it seems, a decision to take a back seat and let the other providers eat into their market share. The results are ofcourse clear for all to see. But all that may be changing. At least freedom.co.zw attempts to suggest iWayAfrica would like to do things a little different.

Revealed recently in teaser press ads, Freedom is a new iWayAfrica campaign for lower priced internet that the company just launched. The highlight of the campaign it looks, is the 40GB data package for $99. That’s just 40GB between 6AM and 6PM; outside those hours, usage it totally free the site says.

But there’s one thing about the offer; it doesn’t mention the minimum internet speeds users should expect, which is always a sign of heavy sharing and therefore possibly slow internet. But maybe they just forgot to mention, who knows! There’s one other thing too; the offer says “from” $99. That “from” word is usually a sign that terms & conditions may see to it you pay more than just $99. We haven’t contacted them about this, so benefit of doubt.

We’d feel it’s a deal worth considering if it wasn’t for yet another possible deal breaker; there’s no mention at all of the initial installation costs. In other sections of the iWayAfrica site though there is, and the information suggests an “initial payment as required“. How much is something you will learn when you ask them.