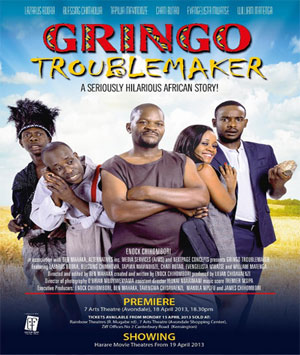 On the evening of independence day, 18 April, the Zimbabwean Shona film Gringo the Troublemaker by NAMA award winner writer Enock Chihombori premiered. The 1 hour 50 minutes production was based on the ever popular 1990s series “Gringo”. The reviews were excellent and the movie received a lot of praise from many critics. Yet almost three and half months later the film is still yet to recoup its $48 000 initial cash outlay.

This seems inconceivable considering the amount that western movies gross in a week. At first I was tempted to join the bandwagon and blame it all on the insensitive pirates who have terrorized the local arts industry, but I decided to take a more in-depth look at the story and I gained a lot of insight. The pirates were to blame but producers might well have chosen the wrong marketing strategy and to some extent, the local market is not yet ripe for the picking.

The movie was set to premier in local theaters and a certain online store called Headlines Africa which is based in Canada. Close to four months after premiering there is still no “official DVD” release. Pirates discovered that and took advantage of the situation; they have been selling the disk for an average price of $2 on the streets. The online version was provided on a Pay per view basis at $3.50 per view plus any internet bandwidth costs that people have to incur in order to watch the film. Meanwhile, in cinemas people have to pay an average of $5 per person. Given that any of the two options are much more expensive than the pirated disk, it is no wonder people chose the street version.

The situation was not helped by the fact that most people in Zimbabwe do not have access to high speed internet connections that they can use to watch the film on their devices. Some do not even have the credit/debit cards that they can use to make international payments to the online store. While it is my understanding that the strategy to release the movie online was meant to cater for the diaspora market it would be a good thing if we had a local streaming service that accepts local methods of payments such as EcoCash and saves international bandwidth. As an aside I think it was the online version that provided the high quality Rip used by the pirates.

While cinemas are popular within some circles and in some countries, this is not the same in Zimbabwe. On the countless occasions that I have visited the cinemas I am yet to see a full house except during “classic” European league soccer matches. In fact a good part of the population do not have access to cinemas which are mainly located in major towns only.The majority of Zimbabweans prefer watching on DVDs. Also in most cases those who go to cinemas are not deterred by the availability on the street of DVDs of the same titles that they are watching. All this should have encouraged the producers of the movie to quickly release a DVD for the movie.

Summary of the lessons

It has been said on countless occasions that one ought to “think global but act local.”

I cannot help but feel if the production team for Gringo the Troublemaker had paid heed to this creed they could have avoided at least part of the piracy problems that have fallen upon them. This is not to say that the pirates are justified in their act of infringing upon other people’s copyrights. Far from it. It is rather an assertion that despite how people may feel after comparing the local industry with the global market they ought to recognise the local market’s needs first.

10 thoughts on “Lessons from the Gringo film”