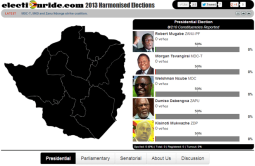 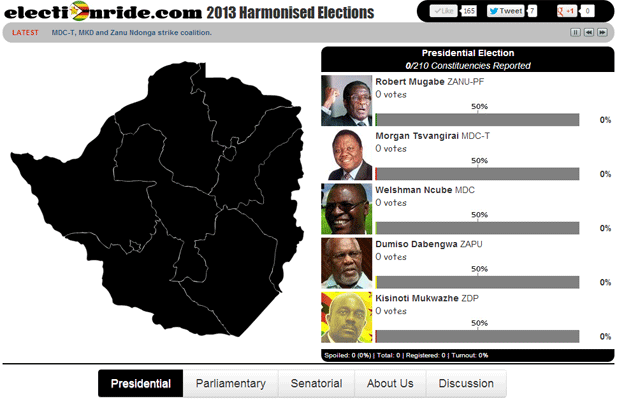 A new website, electiOnride.com, promises it will make results of the harmonised elections to be held this month available online in real time. Well, as real time as they are announced by the Zimbabwe Electoral Commission (ZEC) of course. And there’s good reason to believe they’ll deliver on this – a lot of work has evidently been put in building the application that is already available online.

We received the tip in our mailboxes this afternoon from the people behind the website who unfortunately didn’t want to identify themselves. Their response to our “who’s behind this?” was, “electiOnride.com is a community of Zimbabweans and is not run by any organization.” Update: electiOnride.com just wrote to us to clarify that they meant they are “politically unaffiliated.”

We clicked around the website, and to say that we are impressed would be an understatement; a lot of deliberate work was put into this. It’s professional work done by organised people which says ‘organisation’ or support by an organisation(s). And besides, it will take a lot of resources to gather that data and present it on the website.

On to the application itself, using an interactive map divided into constituencies users of the website can view in real time the results in each constituency in Zimbabwe. This, the person that got in touch said, will make analysis of election results more open and easy.

electiOnride.com also make it clear that they only display data as published by the Zimbabwe Electoral Commission (ZEC). According to the email we got, they will have numerous “community” members all over the country, who will populate the data as it is announced by ZEC. On how they will guard against errors, they said the data submitted will go through an algorithm that checks for consistency. The community members responsible for data entry, they said, do not know each other and this will help with the integrity of the data.

They also said in the email that they in the process of reaching out to ZEC.