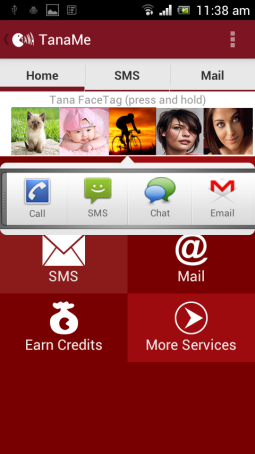 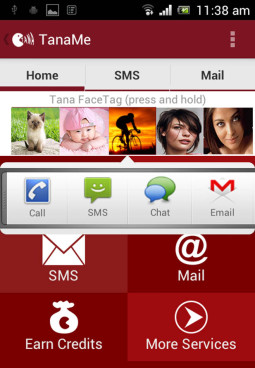 A new Zimbabwean VoIP mobile app called TanaMe has found its way to a number of app stores. The app was developed by Tana Communications a family owned business based in Mutare and led by Tawanda Chitaka. TanaMe comes with a number of useful features like SMS, Chat on multiple IM Accounts (Facebook, Yahoo and MSN) and Mail, the best these is the apps ability to make VoIP calls.  According to a press release the VoIP calls within the TanaMe network are free. Calls to other Zimbabwean networks, i.e. Econet, Telecel and Netone are charged 15c per minute. Here is the full price list:

Targeted for both local and global markets TanaMe in not without competition in both arenas. Globally, there are dominant leaders like Skype, Viber, iCall and Fring while locally there is Guroo to contend with. It is usually optimum for a new app to come with cheaper services to enhance its adoption, but here some of TanaMe’s tarrifs are higher than the rates charged by other VoIP apps. For instance the Skype rates to make calls to a US line listed here range from  0.9 cents to 1.5cents per minute. To make calls to a UK line Skype charges between 0.7 and 0.8 cents per  minute. For Zimbabwean numbers however,  Skype charges 16.5 cents a minute which is a little bit higher than the 15 cents charged by TanaMe. But Guroo, which is already targetting the local market, charges 12cents.

The app’s biggest selling point (in my opinion) is the ability to buy more TanaMe credits using EcoCash.  This process utilises a hybrid feature similar to that of Pay4App we wrote about in March. Here buying the credits involves manually sending money to TanaMe’s EcoCash merchant account using your phone. In addition to using EcoCash to get more credits, one can also use popular online getways like MasterCard, Visa and PayPal.

The other selling point when compared to local VoIP services like Guroo is that calls within the TanaMe network are free whereas Africom charges 6c for Guroo to Guroo calls. The other advantage is ease of registration which only takes a minute on TanaMe while registration on Guro-o is long and discouraging.

I gave the app a try using an Asus tablet, an Econet wireless dongle and an additional android emulator on my PC called Bluestacks. The app’s interface is quite simple and straight forward. However on making calls the first couple of tries were unsuccessful, the app initially failed to relay from my end. I could only hear the people I called and they couldn’t hear me. However when I kept on trying the calls became successful. On highlighting this problem to Patrick Chitaka a co-developer of the app, he cited upload leg issues on Zimbabwean broadband networks. He said the mobile app works best using ISPs WI-FIs. I should say this doesn’t quite cut it with the majority of Zimbabweans without such WI-FIs.

On first time registration I was given 100 credits, this is the equivalence of US$1 on the app. I then made a call to an Econet line and was charged 15c per minute. The developers say it goes to 5c per minute only when you call a Telco VoIP number. I should say there are not that many Telco numbers around as it’s itself trying to penetrate the VoIP market locally.

My fair assessment (I feel) is that the app is a good idea that can help avoid the high tarrifs currently charged by our mobile operators, however for the app to compete with other VoIP apps the the tariffs need to be lower, especiall the calls to other Zim numbers.  In addition to that, technically TanaMe still has to improve on stability.

The app’s current flaws however should not deter you from giving the app a try and possibly start enjoying the free TanaMe to TanaMe calls.

10 thoughts on “TanaMe, a new player on the Zimbabwean VoIP app market”