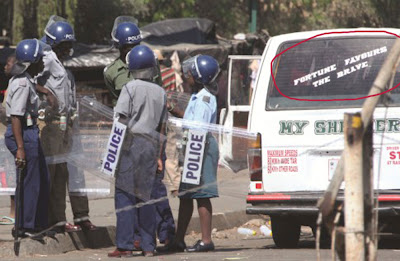 Boarding a Taxi or a public bus – while it might seem like a simple enough task elsewhere; In Zimbabwe It has lately become a very dangerous affair. There have been very recent reports of deaths, robberies and police kidnappings involving taxis. But before this article grabs the attention of the UN and the global sanctions machinery, these reports are very few and far between but by no means non-existent.

They point to a very disturbing trend of lawlessness that can boil over into unpredictable chaos. Already the Harare CBD has been taken over by mostly under-age juvenile taxi drivers who pretty much do as they please, including driving over curbs, reversing against one-way traffic, attempting to run over police officers and pick-pocketing the occasional passenger. To the ‘rescue’ is the local police force who have come on the scene like a bunch of cowboy-era vigilantly sheriff’s deputies who do equally as they please, smashing wind shields, ‘high-jacking’ taxis and clownishly running up and down the streets of central Harare – batons in the air – craving pubescent taxi-driver blood.

The Problem – It’s all very hilarious now but dangerously unpredictable in the future. It’s also not simple to manage. In Zimbabwe like many other African countries, public transport is operated by a huge number of small individual business people who each own one or a small fleet of minibuses that they operate as public transport. Each ‘kombi/mchova’ changes crews (driver and conductor) regularly. 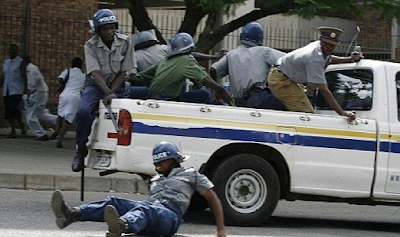 On the streets of Harare alone there are thousands of these vehicles. It is nearly impossible for any single police force to track down each and every one of these vehicles – let alone the crews that operate them – after a traffic violation or crime has been committed. Passengers also find it hard to remember a particular taxi that they may want to report. The reality is that a lot of unknown assailants end up free and “on the run” without even knowing it. To curb this, police officers have had to “apprehend” as many “culprits” on the spot as they can  before they try to get away – but, try to get away is what they do best, this of cause is when the hilarity ensues.

The solution – I couldn’t resist asking myself if there can’t be a more civil and less embarrassing solution to all this mess. After some thought, I think there is – graphic design and technology. By employing simple hand-held police cameras, an up-to-date and accessible digital vehicle registration database, officially employed and registered kombi crews and finally, a bit of graphic design. The most expensive of all these is the pocket police camera which can retail for as little as $160 a piece. 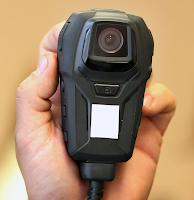 How it works – The next bit is quite simple, each taxi should have a unique and easily memorable alpha-numeric short registration number (ASReN) that ties it to a specific operator, the name of that operator, that operator’s address, that operator’s phone number and that vehicles authorized route(s). All this information is then permanently emblazoned on the taxi for all to easily see and recall. Each taxi should only be operated by a registered crew who are linked to that vehicle’s ASReN. Finally, all taxis will need uniform and clear markings. On each vehicle and crew’s I.D.s will be a matching QR code that the police can scan at random traffic stops to see that all the registration is in order and that the correct crew is operating the correct vehicle on the correct route.

Passengers can also scan a vehicle’s QR code and compare it against a publicly available database through a free app to see if the vehicle is compliant and registered as well as the safety record of its current driver. Passengers can send that QR code with the vehicles ASReN to a chosen contact so that they can be quickly identified in the event of a vehicle accident or reported crime that matches that vehicle.

The system can be even more sophisticated, some or all public vehicles can be outfitted with a GPS tracking device to ensure adherence to route laws, monitoring of transport activity as well as collecting data and computing trends for the Ministry of Transport, Traffic Safety Council, The City Council and the Police. When a vehicle changes operators, it should be completely re branded and emblazoned with the new operators short registration number (this will minimize pirate taxis) 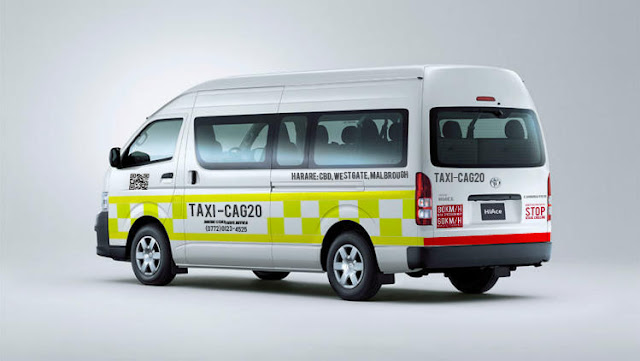 Less chaos – Now back to the cameras and our super hero cops. Instead of risking life and limb, the police will simply need to be stationed (or partrol) the CBD and various routes. When they (or members of the public) observe a taxi breaking the law they simply take a video and picture evidence which they then book as an offence – in real-time- into the national police database.

During future traffic stops police officers simply scan a vehicle’s QR code, if there is a pending arrest warrant or report against the crew or vehicle operator, the police will safely effect an arrest in a respectable and professional manner with the correct resources. If it’s a minor offense the cost will be carried forward to the owners’ operator fees. A notification of the offence is sent to the owner and video evidence, time and date of offence, docket number and criminal law procedure made available should the operator or crew choose to dispute this in court. 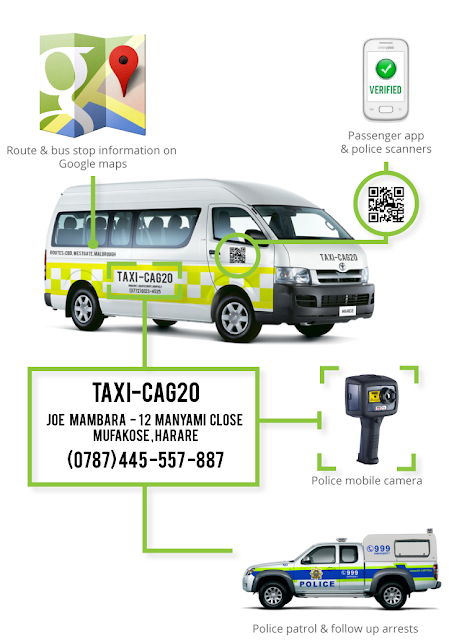 Here is an intresting article on newsday.co.zw that peers into the culture of Kombi crews in Hararehere.

I’d love to hear what you think, or if you have a better way we can refine this idea. I will be happy to update the article or feature your alternative solution on this blog.

You might also be interested in this set of liveries that I designed for the Zimbabwe Republic Police here.