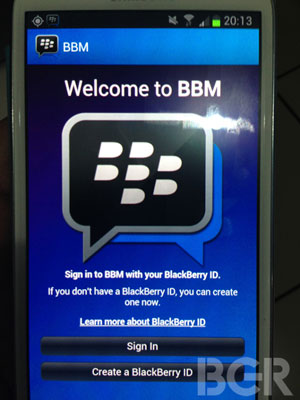 When BlackBerry announced back in May that BlackBerry Messenger (BBM) would come to Android and IOS platforms, the promised launch date was just ‘this summer’, but in past few weeks rumours, leaks and news are picking up pace pointing to a launch happening very soon. Yesterday, the news of BBM coming soon to your Android device came from a unlikely source, well likely actually for the marketing machine that Samsung is.

“Samsung to offer BBM in Samsung Apps store for all GALAXY Smartphone devices” said the title of the press release, and the details reveal two things: the news is targeted to Galaxy device customers on the African continent, and Samsung says itself the BBM app will be available in the Google Play store in addition to the Samsung Apps market.

Why target Africa, well, BBM is still bing in a lot of African countries, along with, and sometimes even ahead of, WhatsApp. What better market for Samsung to give “Offering BBM on GALAXY smartphones in Africa will give Samsung customers access to the BBM social network, including BBM chats, multi-person chats and and BBM Groups,the message”. It may be Samsung see marketing and PR opportunity in Africa where BlackBerry itself is focusing on traditional markets.

There’s no date detail just that the Galaxy devices will have BBM on launch. It’s not clear just how much of a big deal the more open BBM will in countries like Zimbabwe where telecoms regulation hasn’t allowed BBM in. Only to have it come anyway. Considering the millions of Zimbabweans in neighbouring South Africa, who knows, BBM might just be the new WhatsApp here.