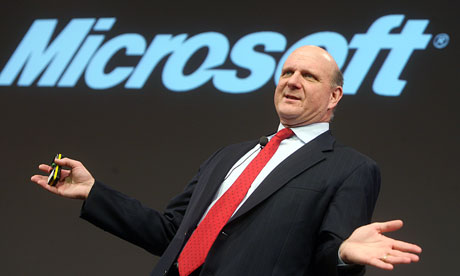 “Ta da!” Sadly the magic rabbit failed to materialize and the audience was peeved at him.

When Steve Ballmer came to the helm of Microsoft on that January morning in 2000 the IT market was one simple monolithic mass. Windows was everywhere on PCs, in government,in schools, in churches, in space,on planes and just about everywhere except perhaps on Linus Torvalds computer.Only James Bond had a smartphone. Even the Europeans were happy with Internet Explorer and everyone loved a Windows PC.

Fast forward to today: PCs are getting rarer than swallows in wintertime as people everywhere switch to iPads and Android tablets. The cloud powered by Linux has taken over the rest of the Windows PC’s duties. Everyone has a smartphone and there is an iPhone and Android app for everything; there is even an app from God too (but then God has always been ahead, Moses received the ten commandments which were written on two tablets.) Now the Europeans hate Internet Explorer so much they fined Microsoft over a billion dollars for bundling it with Windows.Even Zimbabweans who have usually bought anything with a Windows sticker on it are converting to Android in their scores. It is no matter therefore that after 14 years Steve is heading for  the door.

For those of you who live in caves and so missed the news: Steve Ballmer has finally decided to call it a day at Microsoft,most probably he was acting on his psychiatrist’s advice. He will leave the company in about a year. A year is how long it will take to find a new CEO for the company.Being Microsoft’s CEO is depressing at the moment they will probably need each and every one those 365 days to cajole and hoodwink someone into taking the job.

During his reign Ballmer knew failure more than he did success and he will mostly be remembered for his failures; all his few successes conveniently forgotten. Instead of being known for  the Xbox, Azure,Windows XP and Windows 7 which were successes, when people hear Ballmer’s name they are quick to throw the failure of “Vista” and Windows 8 to his face. Such will be his legacy. His failures stemmed from his inaction rather than a failing of his own. He failed to recognise that the world is changing towards the tablets, smartphones and the cloud and only acted late in the game.

Sympathies aside the truth of the matter is that Steve Ballmer had to leave. His list of failure is endless:

At the moment Microsoft finds itself in a watershed moment; a kind of limbo Apple found itself in for a long time in the 90s when they were not doing bad but not doing exactly great either. I have this suspicion in me that Microsoft’s Chairman, William “Bill” Gates, chose Steve to be the next CEO simply because his name was Steve after observing the successes of Steve Jobs at Apple.

What Microsoft needs now is a “A Hail Mary!” or a guy who can pull a rabbit out of his hat not a CEO. It has been a while since they have done anything innovative. They have even stopped racing the competition. Where is their own  WinWatch,where are their WinGoggles to compete with Google Glass,  they have no WinFiber or WinLoon to compete with Google Fiber and Google Loon.They are so afraid of another Vista they are dead, immobilized by their caution.They need a Steve Jobs, a young fresh mind, that is innovative and is not afraid to fail. Someone to shoo away that jinx. Steve Ballmer was not that man.

To be fair the world IT market is very different from the Bill Gates days when Microsoft were the undisputed leaders. There are alternatives in the form of tablets and smartphones. The Global Financial crisis happened and people are not as generous as they used to be with their PC budgets and the importance of an Operating System has diminished since the emergence of the cloud. It is cold out there on the IT market, but surely Steve could have done it better.

We will miss your ability to sell Wind.