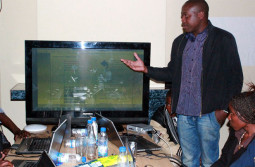 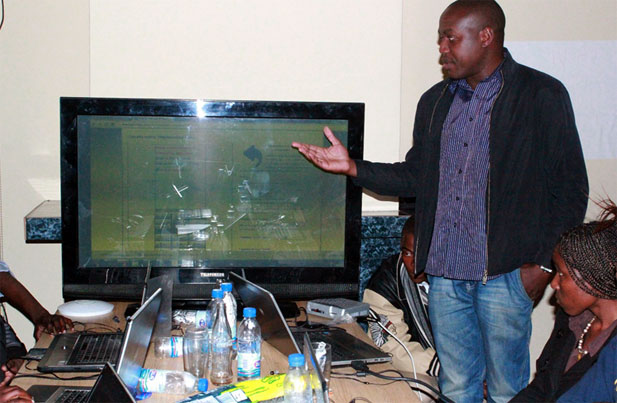 Day 2 was the BlackBerry Challenge

We started off with an intensive 40 minute bootcamp which consisted on Tutorials on how to develop BlackBerry 10 applications by leveraging on the Skills we have been using all along to develop for other mobile platforms. Presentations in this bootcamp were made by Shaun Benjamin, Tafadzwa Moyo and Kudakwashe Gore. Shortly afterwards we got into a discussion on whether it is better to take the native or hybrid aproach to developing mobile apps; Our conclusion was that it native is the only way to go if you have unlimited time, money and skills. Of course, because we live in a real world, we sometimes have to choose to build hybrid apps.

The winning app was iSight. The members of the team that developed iSight were Humphrey Mukwenga, Shaun Benjamin, Garnnet Mandiringana and Rumbidzai Mutaruse.

The app, designed for community use, notifies and alerts the community on what is happening in the hood. From that description, it sounds basic but the way it does this is indistinguishable from magic. It’s like ‘City Lens’ but works with SMS so it doesn’t chew up your data bundles. In fact, a better way of describing it is to say that it’s a: ‘City Lens’, on steroids, for fighting crime and corruption. If you don’t believe me, check out a demo of the app here:

The other apps that were developed at the hackathon were:

The winner will walk away with a BlackBerry Z10.

The event was made possible by sonsorship from BlackBerry, Jumpstart, Mindcraft, Muzinda Umuzi Hub, William Chui and uMax.

7 thoughts on “What happened at the RHoK Hackathon, part 2 of 3”