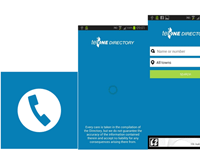 C2 Media has made some serious strides in the area of mobile applications. They have developed applications for iOS, Android and biNu in addition to other custom software design & development. They have a noticeably long track record of some renowned corporates and small companies that they have worked with.

From the research that we have received they are probably the leading mobile application developers in Zimbabwe. I honestly don’t know of any contenders of their calibre. I am waiting for the day when Ecocash will let us know that they now have a mobile application for Android, iOS and Windows and I am placing my wager behind Brad and team.

Available for Android (2.2 and later) and iOS (4.3 and later), this is a most basic Zimbabwe telephone directory application with low data bundle appetite. Very light on Android and slightly heavier on iOS. It uses the Telone directory listing as its database. The major downside so far is the lack of updates on TelOne’s side. Some very ancient numbers are listed as active when as a matter of fact they have long since been disconnected. Again this is only available for Fixed Voice subscribers which is a major downer.

App Store Rating: Has not been downloaded enough to give a rating

This review will be done using a different mobile phone make and operating system.

Do you want me to rate your App? Get in touch!