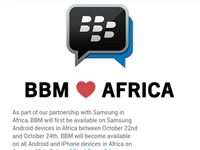 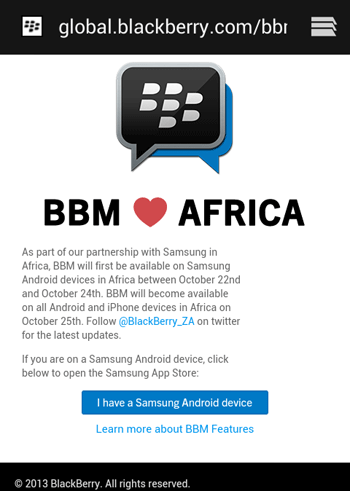 Like most of us, you’ve probably been waiting for BBM to launch again after the false start about a month ago. So like most of us you probably signed up on the BlackBerry website to be first in lines when they finally launch. And the email did come to notify you the app is ready. But on attempting to get it you realised they actually meant that message for just Samsung users. They just won’t anyone else download it yet:

Such a bummer hey! We’re guessing its the same nonsense Samsung and Blackberry have played on iPhone users. Why a company would want to limit the reach of its product based on this beats us. We’re guessing when the price is right…

Anyway, an easy workaround is to just get hold of the APK from a Samsung friend and just install it manually. We’ll see if we can post it somewhere later. But when you do this, you’ll need to get over another hurdle: If you had signed up on the waitlist on the BlackBerry site, you have nothing to worry about; you basically enter the email you used and starting BBMing away. If not, you will have to enter your email and start waiting your turn.

There’s also another way if you don’t want to wait longer after installing the application. Cnet suggests you can go around it by opening the app, entering your e-mail address, clicking next, and then force-closing bbm. To do this on Android enter the multitasking menu and swipe the app away, or go to Settings, Apps, BBM, and click Force Close.

There’s a third way: Just avoid BBM. Do you really need it right away? To do what?

3 thoughts on “BBM finally arrives, but only to Samsung device owners. Here’s a workaround”