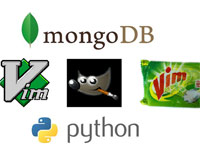 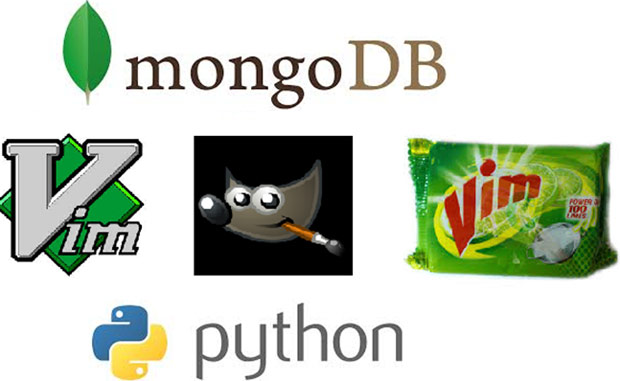 As a Free and Open source software proponent and advocate I fancy myself capable of answering all questions the n00bs have concerning FOSS. Well, almost everything. I always get stuck when people ask me about the names of some of the programs and why they ever sound so unintuitive. Honestly speaking I don’t get it either so I end up cooking one excuse or another but today is as good a day as any to talk about these issues. We need to talk about the Python, the GIMP and Mongo.

Why in the name of all things holy would someone name a photo editor the GIMP? To newbies the explanation that this is an acronym for GNU Image Manipulation Program inevitably leads to the the question “, What is GNU?” In response to which they get a cryptic response that this means GNU is Not Unix which invariably ends up with a discussing on recursion and infinite loops. This is hardly suitable material for people who have just learned about that a mouse is not a rodent but an input device. Recursive geek jokes are unlikely to appeal to the wider public and in my humble opinion should be avoided. Compare the name GIMP to the commercial product Photoshop which is aptly named;I think.

Some of the names are plain horrible. Filezilla for example will usually make one think of the Godzilla movie franchise. If you haven’t watched any of them all you need to know is that the Godzilla was not exactly the hero of the movie. Why wouldn’t they come up with a name like CuteFTP. Then there is Python which was supposedly named after some obscure and ancient T.V. show that no one watches anymore.  Even if we are to accept this inside joke the creators of Python have,as a double entendre of sorts, adopted an actual python as their logo. Somehow this is supposed to bring people flocking to the Python fold.

The logos of some software add to the mystery. For the GIMP the logo features Wilber who is a mystical animal called the GIMP thus perpetuating the culture of recursions. How on earth is a new user supposed to know this by looking at the logo of the software. The creature looks more like a cat holding a brush in its mouth than a the logo of an image editor. And in case you are wondering the GNU logo is the GNU head. Which looks more like a sneering bull than anything else. Somehow this is supposed to encapsulate the Free Software movement and all its ideals. Perhaps the GNU head was making a face at Microsoft and its Evil Empire.

You will be forgiven to think Mongo is short for Mongoose. As it turns out it is the name of a very popular database named MongoDB. VIM is not a dish washing powder but the name of a venerable command line text editor. Apache has nothing to do with Indians or (if you have been watching too many action Movies) helicopters. Maybe the feather they use as a logo means it’s light on resources or something.

The truth is that we are not all geniuses and if open source software is to be universally embraced then perhaps name changes should be in order.

As icing to the cake a good number of projects are not so Free either. The Free Software world is teeming with “benevolent dictators” who seem to make major decisions on a whim. For example Torvalds just woke up one day and decided the next Linux Kernel version would be called version 3. Mark Shuttleworth supplanted GNOME with Unity and the Ubuntu team chose Mir over Wayland for reasons I am still trying to understand.

It seems the take it or leave attitude is commonplace in the Free Software world. Although a lot of projects such as Fedora and Ubuntu accept community input the project leaders hold all the power. This is the reason why for the latter we are stuck with the ever present ugly default paper and (for a while) the ugly default brown theme. Projects follow what is called a production oriented approach. They produce it as they want it, call it whatever they want and you are free to use it if you want. This is not an ideal way of doing things in this world of Choice.

I think some of the poorly chosen names are at least partly responsible for holding back some otherwise great open source projects. This is further compounded by the fact that these names are hardly ever promoted in the mainstream media. For the sake of Open source please come up with better, more descriptive names!

Some of the names are well-just dumb.It’s like watching the Big Bang Theory Comedy show. A bunch of geeks, nerds and bookworms snickering at obscure inside jokes. What works and passes as a joke at Nerdfest does not work for the world. People need apps they can understand not lectures on Schrodinger’s cat.

18 thoughts on “We need to talk about the Python”