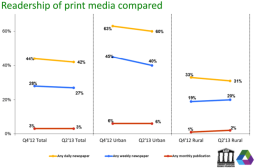 We just came from the announcement of the Zimbabwe All Media Products Survey (ZAMPS) by the Zimbabwe Advertising and Research Foundation in Harare. A key takeaway, and what us media folk focus on is the press readership. As has been the trend for a couple of years now, the readership of newspapers continues to decline. General readership of daily newspapers for quarter 2 this year declined from 2% points from the 44% registered in Q4 2012, to now 42%. In the same period, the weeklies’ readership declined from 28% to 27%.

Of the dailies, the H-Metro had the sharpest, from 17% to 13%; followed by NewsDay whose readership base lost 2% from 13% to 11%, and then Daily News and Herald which lost lost 1% each. The Herald now as 24% of the market share, and the Daily News, 12%. Between rural and urban readership, the sharpest decline for the daily papers was registered in the urban areas, we’re guessing due to the fact that these people have more access to the internet. In fact, as the graph below shows, The Herald maintained its market share of 18% readership in the rural areas. 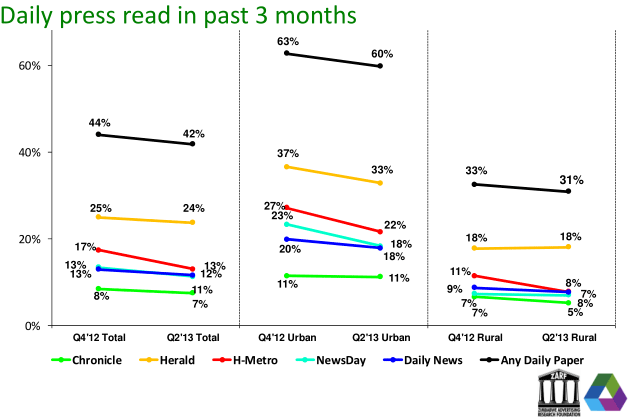 Amoung the weekly newspapers, The Sunday Mail registered the largest decline in readership in urban areas losing 3% points from 27% to 24% in the period reported on by ZARF.  Two weeklies are however bucking the trend; The B-Metro ( a Zimpapers Bulawayo tabloid) rose from 1% to 4%, and Kwayedza, a Shona vernacular weekly, also had a rise in readership from 2% in Q4 2012, to 4%. The gains by these two weeklies however didn’t change the general trend of readership decline in the category. 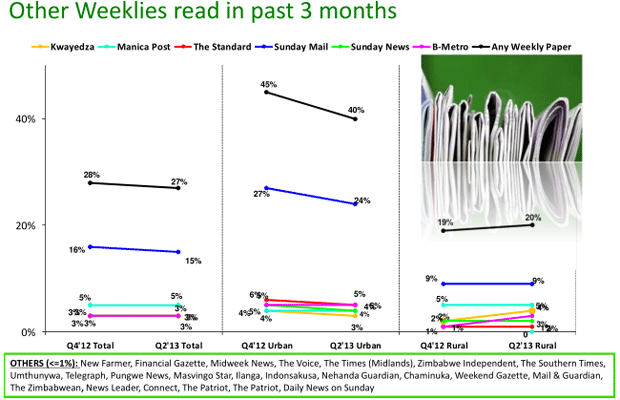 The unfortunate thing about the ZARF ZAMPS results is that they don’t go into detail about the internet habits of Zimbabweans, leaving us to just generalize and say that the trends point to people in urban areas resorting to the internet for news content. The general trend shown by the report in terms of internet access is that there’s a general increase in the number of people accessing the internet and that most of them are doing so via mobile devices.

But the internet access detail doesn’t make sense. For example, according to the report access to the internet in urban areas between Q4 2012 and Q2 2013 remained stagnant at 42%. The increase, the report says, was only drastically registered in the rural areas where access increased from 9% to 13%. 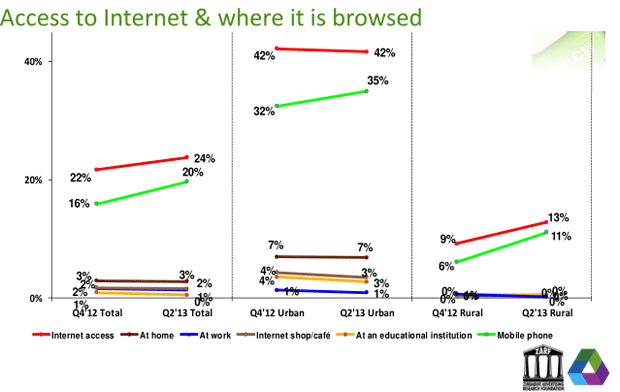 As for what sites are being accessed, ZARF says the popular ones are Facebook, Gmail, and Google (we’re guessing Search), Hotmail, Yahoo, and YouTube. Yup, no mention of Bing; must be very unpopular! 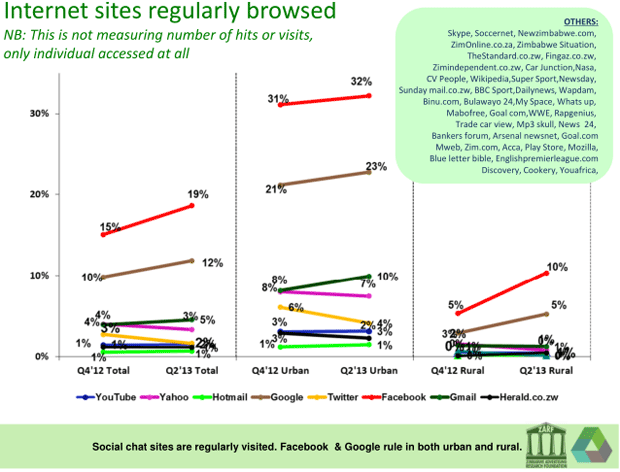 In short, this is what ZARF says but looks mostly inaccurate. We can misleading information in as far as the internet is concerned because this is where we play, but we have no idea just how flawed the rest of the information is. Regarding the print press that is. We feel like writing another “why this data is flawed” piece right now.