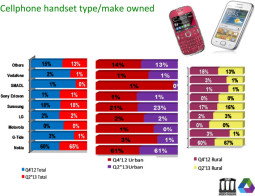 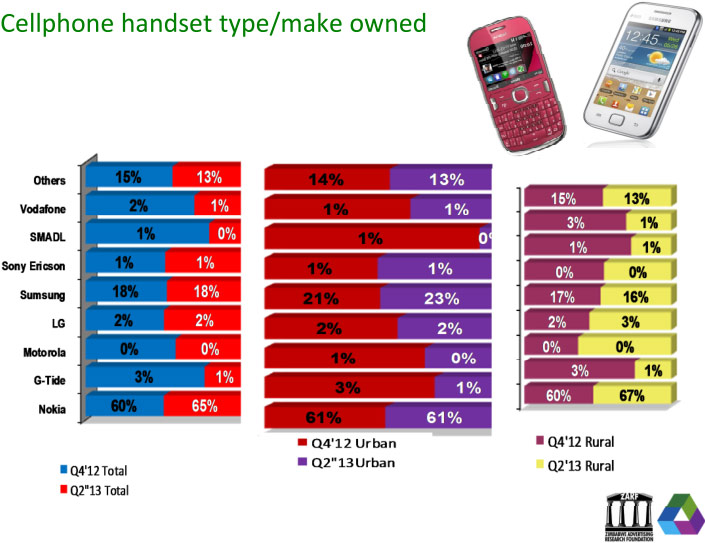 According to a report released today by the Zimbabwe Advertising Research Foundation (ZARF), Nokia still dominates the local market in terms of handset type ownership. The brand, which is on the decline globally, but continues to rule in developing countries. In Zimbabwe, the report says, about 65% of the handsets are Nokia devices. The report is for the second quarter (April to May 2013).

Not only is Nokia dominating the market, its share has actually risen from 60% in the Q4 2012. Unfortunately, they didn’t capture the exact distribution of the Nokia devices between smart, feature phones and dumb phones.

The next most popular mobile phone brand locally is Samsung, which, according to the report, has about 18% of the market share.  Next is LG with 2%, and tied at 1% is G-tide, Sony Ericsson and, for some crazy reason, Vodafone. Crazy because Vodafone is not a device brand, so we’re guessing these are just mobile phones sent in to the country by relatives in the UK. Still, I haven’t seen anyone lately with a Vodafone device so not sure how reflective of data on the ground this is.

On the other hand, I have seen lots of people with GTel devices (me included – I have owned 2 GTel devices just this year alone), and yet GTel is not on the list. But assuming they have it listed as G-Tide (it’s old name from about 4 years ago), it’s still kind of suspicious that they have the same 1% market share as the Vodafone branded devices, and that their market share is dropping.

According to ZARF executives at the event, the results are just what the people they surveyed told them. This, they said, therefore represent what they people perceive, which might not necessarily be fact. The sample size was 2,000 people, 60% in the urban areas and 40% in the rural areas. They also said that if they had more resources, they’d increase the sample size to maybe 5,000 or more.

According the ZARF website, the organisation was established in 1997 to undertake independent market research on behalf of advertisers, the media, publishers, advertising agencies, public relations’ consultants, and the like. the organisation says thy initially adopted the South African All Media and Products Survey model because it seemed the most factual research of its kind.