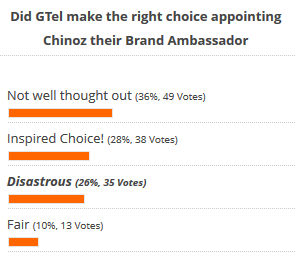 Following up on Chinotimba’s appointment as a GTel brand ambassador, Techzim did an online snap survey to measure sentiments from our tech community and the results largely confirmed my initial thoughts on the issue.

62% of respondents felt the appointment of Chinoz was generally southwards as either not well thought out or disastrous. 38% felt that the Chinotimba appointment was a positive one with 28% of these considering it a masterstroke from GTel.

If the appointment was a publicity stunt as many suggested, GTel certainly succeeded as they got people talking. The Chinoz appointment was amongst the leading stories on Techzim and social media last week and GTel got some publicity going. Whether this will work well for them in the long term remains to be seen.

There is some merit in some arguments put forward that with Chinoz, GTel is looking at the rural to peri-urban markets particularly the “new farmers”. There are also some who came forward and said Chinotimba’s lifestory mirror GTel’s own story. Both GTel and Chinoz have achieved a great deal of success in recent year despite the constant barrage of negativity thrown at them.

GTel has not made any further comment on the appointment after the announcement but “celebrity” endorsements have been consistently been part of their brand strategy as they have partnered with Stunner, and most recently Winky D, to push their brand.