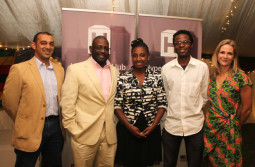 Today we attended the Hypercube hub launch in Harare. The launch event was held at the hub’s new location in Harare (11 Phillips Avenue in Belgravia, for you Harareans). At the launch, the team behind the initiative – the advisors and managers – were introduce and they in turn each spoke about the vision they have for the tech hub.

The operations manager of the tech hub, Taps Murove, introduced the concept of the hub, which is to create a space for Zimbabweans to co-learn, co-work, co-innovate and basically be a community of technologists and entrepreneurs contributing to the country’s tech ecosystem.  Murove also announced one of the tech hub’s main programs called SuperHyper which is targeted at incubating startup companies. Incubation in the accelerator get the startup the resources and mentorship they need to execute effectively sense.

You can read more about Hypercube in these press releases they have sent us in the past weeks.