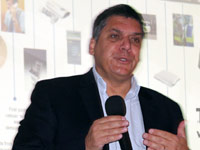 The flagship device launched today is the Motorola TC55 which looks more or less like your regular Android Smart phone. Surprisingly, this particular device was not there at the launch so we could not get a feel of it.

The Motorola TC55 is a high power utility Android mobile device which not only carries smart phone capabilities, but also has highly custom features for enterprise use, especially in ‘’rough” work environments like logistics, mining and any other industry that involves field work.

It carries a high capacity battery which lasts over 48 hours for long distance deliveries, a four times louder (compared to regular smartphone) dual front-facing speakers for effective communication in noisy factory environments and an 8mp camera capable of barcode scanning. Better yet, the device works in the pouring rain and the touch screen responds even when you’re wearing gloves.

Yes, this device, as highlighted, is not a consumer device but highly customised for enterprise use. According to the Motorola team at the event, current clients of the company’s enterprise devices in Zimbabwe include DHL, Coca Cola and Unilever.

“The need for smaller, faster devices is starting to converge us into the type of markets that Samsung and Nokia operate in but with a much different value proposal. We are working in the ruggedized piece of the market not the commercial, white collar market.”

The Motorola TC55 costs at least 30% more than the Samsung S4 primarily because of the added enterprise apps and a perceived low replacement cost for a device working in rugged environments.

The Harare launch is the last of eight other road shows they have been running across Africa. The devices will be distributed by Westcon Africa, which will also assign local channel partners for end user distribution locally.

“We’d like to be structured on how we approach business in Africa. We’d like to start investing through our channel partners in our distribution in Sub Saharan Africa”

It will be interesting to see how this will reinvigorate Motorola’s presence in the Zimbabwean market which was once their biggest Sub-Saharan market after South Africa but now only constitutes 5% of the total Sub-Saharan African market outside South Africa.

2 thoughts on “Motorola Solutions Africa launches TC55 smartphone, but not the kind you are thinking!”