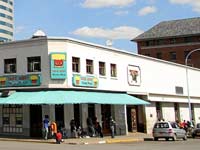 This week the national police force, ZRP, in an operation code named Operation Restore Order swooped in on some well known illegal technology trading hot spots in Harare. The posse swamped Ximex Mall ( which is the de facto headquarters), Gulf Complex, Cameroon Street ( kuFlyover), Magaba in Mbare and Albercone Avenue. Their ambitious mission is to put an end to the illegal trade in stolen technology wares and I hate to say it but they( the police) are most likely going to fail.

We all know ( have all known for years actually) : if you want to buy a cheap phone or tablet for a great price you only have to pay Ximex Mall a visit. We all know, as we have for years now, that a good number of the phones are probably stolen property. It seems though the police did not know. According to a report in the local press, the Police spokesperson for Harare, Inspector Tadius Chibanda is quoted as saying, the dealers had invaded the mall which has been closed for refurbishment and renovation- it seems to him the closure of Ximex for renovations is the conditio sine qua non without which these dealers would not exist.

Legend has it that these fellas at Ximex are merely part of a well established network. According to lore even popular musicians are part of this network. These musicians, it is said, have pick pockets working for them during their shows, which they use as bait to lure people, whilst their pick pockets relieve people of their gadgets: cellphones, tablets and other technology paraphernalia. These pick pockets then deliver the goods to the dealers at Ximex and everyone in the network including the musicians get their cut. I am sure this is just an urban legend but at least the story tellers know there is more to it than merely a bunch of dealers selling their stolen wares which is a lot more than the police know.

Noble as it is there are a lot of reasons why the police are likely to fail in their quest. Not the least of which is that their operation does not address one of the root problems:  there exist a market for cheap technology stolen or not. There a lot of people out there who want an iPhone or Galaxy Tab who cannot afford to pay a thousand dollars for it. The dealers will find  and have already found other trading spots where they can carry on their business. It is like killing the Hydra you cut off one head and two more will grow in its stead.

The other problem is that there is a single visible weakness point in the supply chain of stolen gadgets: during the sale. In my opinion the police need help from legislators (or POTRAZ) and network operators.  In addition to registering your line people should be given the opportunity to register their phones as well. When a subscriber’s phone is reported as stolen it should be entered in a shared database of Blacklisted and Blocked phones by all the mobile operators so as to render it unusable. Sure smart people will find a way around it but this will no doubt result in a significant fall in the trade of stolen smartphones and tablets at least.

No doubt in the coming weeks the illicit dealers will be able to return to Ximex as the police grow weary of their stunt. After all one cannot be expected to put out a raging forest fire by stomping at it. The status quo is unsustainable and we all know it: the best we can hope for is a Kombie like scenario were the police get their bribes and let the dealers go. Perhaps we will see a couple dealers appearing in court but it is very difficult to see how the police will get a conviction in this case. At most they can only prove that the dealers are operating businesses without licences. It would not be easy to trace the legitimate owners of the cellphones without the cellphone database and without proof of theft the dealers will in all likelihood walk-after a slap of the wrist. The burden of proof is on the police to prove that a device was stolen- the dealers who should be presumed innocent do not have to prove anything.

I think the police need technology to fight technology crimes but considering the ZRP does not even have a website(that I know of) I think we are expecting too much here. In my opinion Operation Restore order is great but “moto wemapepa.” It is like one of those drug operations in Mexico: publicity stunts that help no one but result in more premium going to the drug dealers before it dies in some police report wherein it is immortalized before being carted into some cabinet. Just politicking here folks move along.

11 thoughts on “Ximex Mall: Operation restore order is great but …”