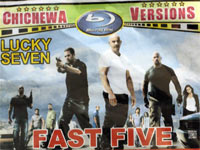 So I just watched a Chewa voice-over translation of Fast Five. A Malawian pirate translation that is. It was as real as any perfectly done voice over can be. Starts off a bit off ofcourse coz there’s no way in the world Vin Diesel, Paul Walker and the others could really be conversing in Chichewa, but you quickly forget and settle into it comfortably.

I got the Chichewa translated movies on DVD about a week ago on my visit to Malawi. Got them at a shopping center in Lilongwe with the help of a cousin. Passing by a makeshift movie house, I heard what clearly sounded like a Chichewa movie playing inside. This would be surprising because there’s just not enough local movies around so I asked and was told it was just a translation. I peered inside the movies and sure enough about 50 or so people were glued to a large screen TV playing a Chichewa version Chinese Kung Fu flick.

Amazing. Whoever did this had definitely struck a code with his market. The people I saw definitely loved it.

Later I found out that the street vendors sell both the regular English title as well as, if you prefer, the Chichewa version. Surprisingly the Chichewa version is cheaper which doesn’t make sense considering the work it takes producing it. I’m guessing volumes game maybe.

My cousins later told me the government had issued a warning to the people behind these productions to stop but clearly that didn’t work. Leaving Malawi I even bought some more Chichewa version DVDs in Mozambique.

I don’t know enough about the Malawi as market to understand what exactly drove this phenomenon but I wonder if it would work in other small and ignored markets like Zimbabwe, Zambia etc… or maybe it’s already started, I don’t know. This was my first time experiencing it.

Yes, there’s the bit about piracy wrongs and all the copyright rules being violated, but that’s a discussion for another day. For now, I just wanted to appreciate how blown away with the simple innovation I am. They used language to solve the problem of local content in an amazing way delivering movies that would otherwise be less interesting. From the uptake I witnessed, they definitely solved a problem.