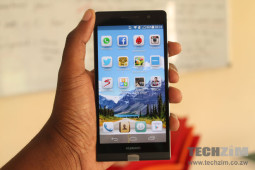 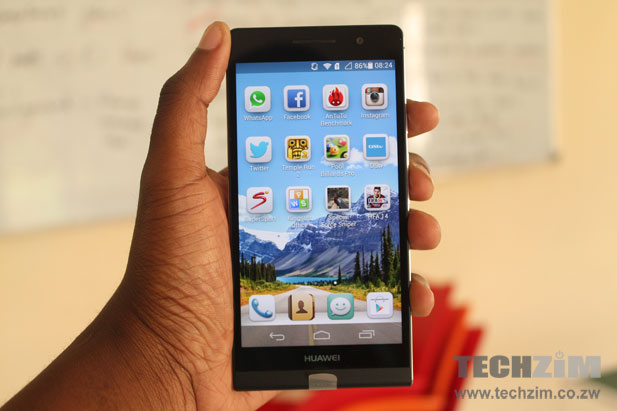 China’s leading smartphone maker Huawei, released its flagship Huawei Ascend P6 in June 2013 hyping it with phrases like “elegance with edge”, “impossibly slim”, “impossible beautiful” among other high sounding words. Econet has brought the Huawei Ascend P6 to Zimbabwe and it definitely lives up to the hype with its crafty design, ultra-slim shape and great features that just about justifies the $500 prices tag.

The Huawei Ascend P6 spots a compact but elegant look with nicely trimmed metal edges which gives some durability and toughness. The base is oval shaped which is probably an attempt to give it a distinct look from other high end smartphones it competes with despite being likened to an iPhone in some circles. 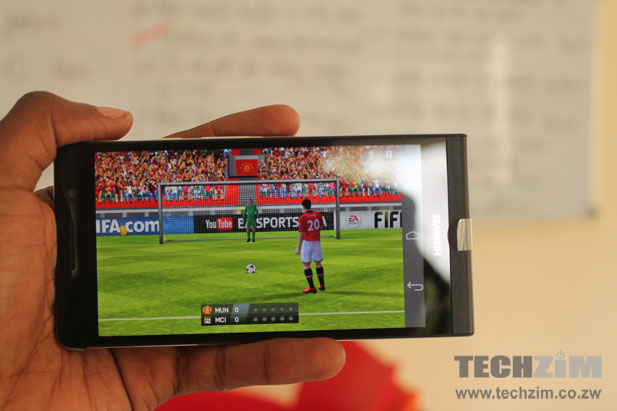 The Huawei Ascend P6 is slimmer than the iPhone 5 but still an odd 8 grams heavier.

The power button, volume control buttons, Micro SIM card slot and the memory card slot are all subtly placed on the right metal side of the device with the charging pot at the top side of the phone.

The main design challenge on the Huawei Ascend P6 is with the sharp headphone placement used to open the SIM and memory card slots. The object is very sharp and questions of storage safety will pop up when you decide to listen to music using headphones. The headphone jack is also at the base left side of the phone which is not as convenient as having it at the top of the phone when handling it. 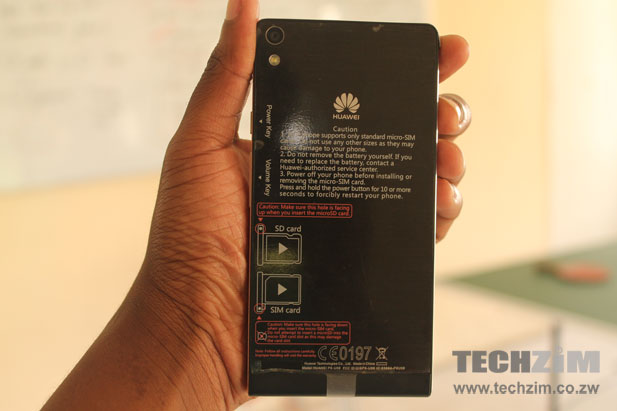 The Huawei Ascend P6 has a top quality 4.7 inches screen that has the tough Corning Gorilla Glass and thanks to Huawei’s Emotion UI 1.6, the display has several customisable themes that gives users many different was to interact with the device. Carrying an IPS and LCD capacitive touchscreen, with16 Million colors and a 720 x 1280 resolution, the Huawei Ascend P6’s display is a wee bit short of reaching iPhone standards. The main difference is that the LED backlight found on the iPhone 5 is missing on the Ascend P6.

Equipped with a quad core, 1.5GHz processor and 2GB of RAM, the processing ability of the P6 is good but not good enough for heavy games (1 GB range) like FIFA which run in ultra-slow mode on the Ascend P6. However, other apps run really well even in multi-task environments although you may experience some lag when transitioning apps.

Oddly, Huawei did not employ popular chipsets like Qualcomm or NVIDIA but rather went with their Huawei K3V2 chipset also found on the Ascend Mate.

The internal storage on the Econet device is 8GB although you can also find a 16GB version.

The Huawei Ascend P6 has two impressive cameras equipped with fun sharing and editing features. The rear camera is an 8MP (3264×2448) camera with auto focus and an LED flash light that captures vivid images in most environments.

The 5MP secondary front camera is equally good and works best using the “beauty feature” which is one of the standout features on the Ascend P6’s cameras. By adjusting the beauty level, you can smoothen patched or uneven skin texture to give your portrait photos something like a photoshop finish. However, putting the beauty level at maximum (10) will give you an over saturated photo just like what happens if a person puts too much make-up.

Another useful feature is that you can preview different effects (emboss, mono, antique, sepia, etc) before taking a shot.

The battery performs like a typical smartphone battery. Although the Li-Po 2000 mAh battery carries some weight, don’t set your expectation too high low as it does not go beyond 8 hours at optimal use. When testing it, we ran games, played FM radio, used social media, whatsapp and web browsing and after power warning came after about 7 hours. It does have a useful power control feature which although helps control power usage, does not address the real weakness in the battery.

The AnTuTu benchmark rates the Huawei Ascend P6 at the good level but unfortunately is just below high-end counterparts of 2012 like the Samsung Galaxy S3.

Huawei killed it on design. The Huawei Ascend P6 is very attractive and makes a real impression if you are looking for something classy. The display quality also feeds well into the great visual appeal. Performance is definitely not the best but cannot be classified as bad and its something that easy going users may not even notice.

The Econet price is $500 which is reasonable given that international average is around $350 and at one point reached as high as $400. Can you get an equally good or better phone at $500? Definitely yes, but probably not with the monthly 50MB data that Econet is offering with Huawei Ascend P6.

9 thoughts on “Huawei Ascend P6 review: Brilliant, but pricey at $500”