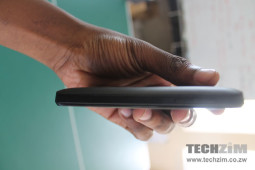 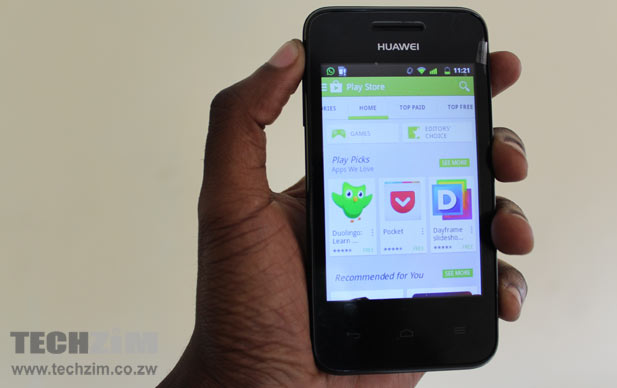 As part of its “Unbelievable Christmas Deals” promotion, Econet is advertising the Huawei Ascend Y200 for just $70 and the package includes 50MB of data for six months and a free Huawei T-shirt. Released in May 2013, The Huawei Ascend Y220 is an upgrade of the Huawei Ascend Y200. The Huawei Ascend Y220’s main upgrades from its predecessor come in the form of an improved 1GHz Dual Core processor but ironically the rear camera is a downgrade from a 3.15MP to a 1.2 MP. Everything else is more or less the same including the Android 2.3 (Gingerbread) OS, battery capacity, memory and screen.

We have definitely seen bigger and wider entry level smartphones but not from a reputable brand at $70. The Huawei Ascend Y220 weighs 130 grams, 10 grams more than its predecessor (Ascend Y200). Although the phone’s images in the Econet adverts give the impression that the phone is a dual-SIM the size of a Samsung Galaxy Ace, it is significantly smaller and carries one SIM card. The power button is located at the top-right, far away from the volume controls on the top-left-side of the phone. This still works well in small phones like these that fit in the palm of your hands and are easy to control with the index finger.

Aided by a dual core processor, the 3.5 inch HVGA full touch screen is quite responsive and it has the standard 320 x 480 resolution you would expect from an entry level device. There is however little real estate to navigate typing but the process seems easier by using the Huawei’s custom keyboard (called the Huawei Input Method) over the Default Android Keyboard.

Thank goodness browsing is not a nightmare as I thought it would be on such a small screen. However, the default browser on the Ascend Y220 renders web pages quite fast and on mobile enabled pages, there is no need to zoom in to view text properly. Trouble comes with web pages not optimised for mobile meaning the best view comes from tilting the phone horizontally.

There is not much to talk about the 1.2 megapixel (1280X960) camera on the Huawei Ascend Y220. The quality of images is below par whether it’s day or night. But then again, who buys an entry level phone looking for a fancy camera?

The key upgrade on the Ascend Y220 from the Ascend Y200 is the processor. The 800 MHz Cortex-A5 on the Ascend Y200 makes way for the Dual core 1GHz processor, MTK MT6572 reported to be the first entry level focused system-on-a-chip (SoC) that integrates WiFi, fm, GPS and Bluetooth. The Ascend Y220 is indeed quite fast and can process apps up to 40MB in size including games like Temple Run 2, which, in our experience, failed to load on similar entry-level devices.

Carrying a 256 MB RAM, the Huawei Ascend Y220 is low on memory and there is little room to install additional apps without adding an SD card. Since Econet is not selling the phone with an SD Card, we had to add an 8GB memory card to be able to “watsura” and tweet on it.

The Huawei Ascend Y220 has a low to mid-range capacity battery at 1350mAh which gives 200 hours on standby and 4 hours of talk time. Granted, the rather small phone inspires little gaming activity, but regular use gives you 24 hours of battery life with little hassle.

Because of the low memory spec, we just used the AnTuTu benchmark on the Ascend Y220 and it has a “not too bad” score of 9025. Its 256 MB Ram speed scores a low 588, approximately 5 times slower than the highest ranking Samsung Galaxy Note 3.

The Huawei Ascend has impressive processing power and at $70 plus a few add-ons, the Ascend Y220 as sold at Econet is probably undervalued. Econet even claims they are selling the device at cost with the motivation to bring smartphones to the masses and have more people using their broadband services. The memory leaves a lot to be desired but adding a memory card (which can cost about $3 for 8GB) solves the problem.

Huawei is already amongst the leading global smartphone makers and their entry level devices can be trusted ahead of no-name imitations that have flooded the Zimbabwean market.

We would recommend it if you are totally new to Android and on a shoe string budget. For seasoned Android users, at $70 the Huawei Ascend Y220 can be a good “stop gap” device in the event that you lose your better phone and can’t replace it immediately.