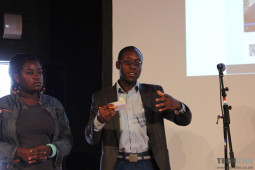 In February Three startups emerged from British Council’s Culture Shift Challenge. One of them, Bigeyes , walked away with 2nd place,  £1500 in cash, mentorship, and internet sponsorship. With that they promised to revolutionaries the way we share and consume online video locally.  While this may all sounds wonderful, in a world where Youtube calls home,  it really didn’t make sense how a £1500 dollar startup could “revolutionaries” online video, let alone pay rent for a year.

In Zimbabwe only 4.6million people are said to be on the Internet, most of which exclusively access it from their mobile phones at 2G speeds, forget about doing online video ‘revolutionarily’, doing online video at all is absurd enough a concept for a startup in Zimbabwe. If what makes it difficult is not the expensive bandwidth or the slow speeds internet users have to suffer, it most certainly is the fact that there isn’t a lot of local video content out there to showcase. Yet, by some logic, Bigeyes continues to promise us an online local video revolution. Oh…kay?

Fast-forward seven months to today, Bigeyes is still alive and in business.  On 8 May this year they launched a Facebook  page  where, it appears, their operations are currently based. Judging by the name of the Facebook page “bigeyes.co.zw” and the fact that the domain of the same name has been registered with ZISPA (the .co.zw dudes), a website might be coming soon. In July they posted their first video – a 20 second clip of a guy dancing in public. Today, two months later, they have posted twenty-six videos  – most of which are local – and they have earned over 100 likes. Meh! You say? Well take a look.

By the end of that video I was crying REVOLUTION!!!. Big eyes are onto something here, and I hope they realize it.  The video above is of an impromptu interview of a cyclist and his heavily pimped-out bicycle by some random person. I think this is what local content is all about. Here, I’ll break it down. It seems Bigeyes may have just Baba-Jukwarised Online Video in a way that if we choose to, could bring on a local online-video entertainment revolution that is more accessible and well… truly local.

Local Content is not the problem
During their pitch at Cultureshift, Bigeyes constantly highlighted the fact that content is not really the issue here, its sharing of that content. Come to think of it, they could be right. Today at least 8 million mobile phones are out there, most of which have a video camera conveniently built-in. That, combined with the shock, awe and hilarity a Zimbabwean often encounters in an average day, gives us all the content we’ll really ever need.  From secretly filmed chaos-mongering ‘politicians’ doing their thing, to that drunk old madala in the blue overalls breaking into a hilarious song and dance routine, or even the rare footage of the birth of a miracle-baby, we are spoilt for choice when it comes to local content. However, once someone has that precious video on their mobile phone, how do they make it viral?  The answer, thanks to Bigeyes, now seems to be really simple, but before I continue, what’s with the guys in this next video?

Using the tools that locals love in a simple way

Like me, you might have wondered why Bigeyes were using Facebook instead of Youtube as their base of operation, it now seems all too obvious.  Getting a local video viral on Youtube – however tempting and ideal – is very difficult in Zimbabwe because not too many locals use Youtube. But on Facebook, land of ‘Ward 21 Kumapenzi’  (as distasteful and crude as it is) anything can go viral, especially local content.

Many local content creators have found fame on Facebook, ask one Mr Jukwa if you can find him, he/she/it/they’ll  tell you all about it. It’s fame that‘s the major incentive for people to create and share content these days.  Fame, once  its gotten, is fairly easy to monetize. Bigeyes appears to have all the ingredients they’ll need to be the first practical local crowd-sourced online home for local video. To get a video on their platform you simply need to capture some footage and send it to Bigeyes as a direct message on Facebook, that’s  it. These guys are also promising some sought of Whatsapp integration, whaaa!?

While this is a big opportunity, it’s still yet to be seen if Bigeyes will do with it, what we have imagined here. Who knows, maybe they have an even bigger revolution to wage and a much more intriguing method to the madness.  Unlike a full on revolution, so far however, it all appears like a bush war being secretly fought deep within the trenches of the Internet. In the mean time, for locals, this is an ideal opportunity to stop matter-of-factly explaining why this idea will fail, break out our camera phones and start creating some online video drama and excitement we can all enjoy and make viral.  Just saying.

Next I’ll sit down and have an interview with the Bigeyes team. Leave your questions for them together with your comments below.

Disclosure: LSM Kabweza, editor of Techzim, is one of the Big Eyes advisors, something that carried over from his involvement helping organise the Culture Shift Challenge.