As we continue to review the success and failures local startups, Pay4App is one of those that can’t go unnoticed simply because their product is designed to solve the major problem online startups in Zimbabwe face – receiving payments online. Despite having a solution that maybe not perfect, but still workable, Pay4App hasn’t gained much ground throughout the year and uptake has been lethargic.
This has largely been a result of their timid marketing efforts and the product still remains largely unknown despite it having a large potential customers.

The idea for the mobile money based online payment solution was conceived by Sam Takunda and put to action when he joined Pay4App late last year. Takunda admits that when they launched the solution, there was little demand from the consumer side and the number of merchants was also limited due to the still slow growth in Zimbabwe’s e-commerce space.

Their strategy was to “create our own products – powered by our payments technology” which Sam says helped them fund their operations. Pay4App eventually opened up to other e-Commerce players and so far their website displays four merchants including our store here Name.co.zw (whom we wrote about here), Africom the internet provider, and other event based websites that come and go. 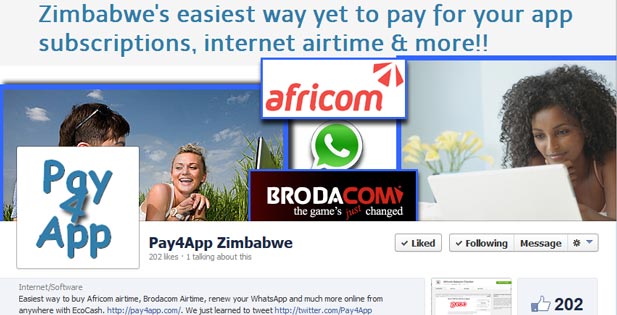 Although Sam wouldn’t say the number of merchants that have signed up so far he did say that all merchants acquired so far have been through organic, word of mouth combined with mentions on local technology blogs and he indicated that the slow growth is deliberate and in his own words,

We haven’t been too aggressive [marketing the platform] because one thing you don’t want as a technology startup is to have a lot of users see your product break in the early days. You want to slowly refine with a small group and branch out from there when things are smoother at the technology stack level. I doubt we’d still be in business if our current customers had to go through the countless iterations we’ve had. It’s pretty amazing that this worked pretty well because as a payments company it’s what you wouldn’t expect to have any form of word-of-mouth virality.

The platform went through some upgrades last week and the refining that Sam talks about will likely take place in 2014 as they are looking to add more payment options for web startups.

Although it’s easy to speculate that they could have done better in pushing the product, Pay4App still is still among the stand-out startups in 2013. With a few adjustments on the platform, and possibly some growth in e-commerce, Pay4App is likely destined for great things in 2014.

3 thoughts on “Pay4App looking to improve on 2013 achievements”