It’s been nearly four weeks since I last wrote an article for this blog. The period between then and now has been characterised mostly by a lot of reading. Yes, the good old fashioned physical books that smell nice and feel soft to the touch. I have also been thinking a lot about my country and Africa as a whole and have been fortunate enough to speak to a number of people who share the same visions as me. My focus has been on where we are, where we are going and where we can possibly go. In this short post, I will share with you some findings and random thoughts on the state of technology in Africa, and in Zimbabwe.

First, the gloomy news: as far as technology is concerned Africa significantly trails behind the rest of the world, and the burst of success stories particularly from the telecoms sector gives us a false sense of security that things are looking up. For example, briefly looking at the latest International Telecommunications Union (ITU) ICT Development Index should jolt you to the conclusion that when it comes to technology, Africa is in a seemingly sorry technological state.

Consider the following startling facts: on this index, of the bottom 20 countries, 19 are from Africa, and on the complete list of 157 countries, only two African countries (Seychelles and Mauritius) are in the top 50% of the IDI. According to the chart below, only three African countries are above the developing world average. 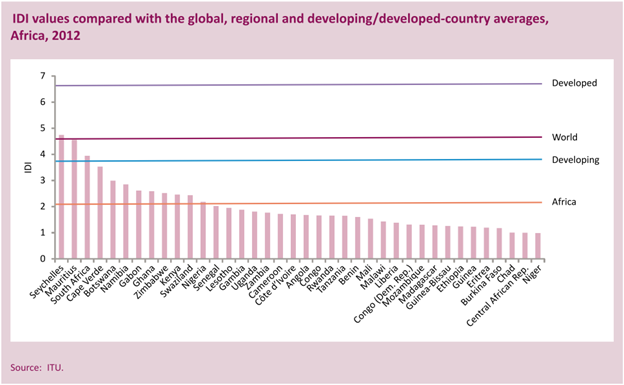 A blog article by an Ashoka Fellow analysed the state of Science, Technology and Innovation in Africa in four categories (Tech Production & Utilisation; Tech Trade/Transfer; Technology Education; and Tech Policy/Governance) and concluded that whatever way you may look at it, “Africa is a technology basket case”. He argues that the anti-technology cultures and attitudes in Africa may well be the black hole of development on the continent. I personally feel this author was a bit too heavy-handed in his analysis, but maybe that’s just what we need as Africa.

And now quickly to the encouraging news: the pieces of the puzzle are slowly falling into place for Africa to start performing a whole lot better in the technology space. For example, more than half the population on our continent is under 25, and while the populations of most continents are aging, ours grows younger. This is a huge asset considering that technology is driven by young people who are the most connected generation in the history of humanity. In Africa, Mauritius, which ranks first in the regional IDI, also has the highest percentage (7 per cent) of digital natives. Second is Zimbabwe, where 6.1 per cent of the population were digital natives in 2012. 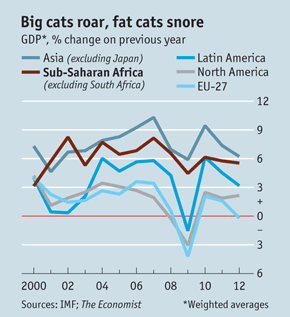 Furthermore, on the economic front, Africa has been growing faster than the developed regions as the chart on the right shows. This makes Africa an attractive destination for international Tech firms looking to take their investments offshore. Companies such as IBM, Google, and Microsoft are already leading the way and making significant inroads into Africa.

According to a BBC Future Africa article, what has really made the continent the darling of the tech sector recently is the extraordinary growth of tech hubs – places where coders, hackers, entrepreneurs and just plain geeks can come together to create new digital products and set up businesses.

From the iHub in Nairobi, ActivSpaces in Cameroon and Bantalabs among the first ones to be established we now have well over 100 now all across the continent according to the famed Africa Hubs map by the team at Bongohive in Lusaka.

Closer to home, Zimbabwe is among the most dynamic countries in the IDI 2012, having moved up four places in the overall IDI ranking, to 115th position. Zimbabwe’s mobile-cellular penetration went up from 72 per cent in 2011 to 97 per cent in 2012 and wireless-broadband penetration doubled from 15 to 30 per cent over the same period resulting in Zimbabwe having the second-highest penetration rate in Africa, just after Ghana (34 per cent).

A logical question to ask at this point is: So what? What does this all mean for technology in Zimbabwe and in Africa? I think the answer to those questions lies in what we decide to do with the resources that we have, and whether we choose to change our cultures and mind-set towards technology. The indicators above are encouraging, the pieces are falling in place in our favor, and I believe we can take the conscious decision to transform Zimbabwe and Africa into technological powerhouses.

In the following installments of this blog, I will be going into detail on the future of technology in Africa and what we can do to leapfrog the developed economies. I believe it can be done.