Social media has started on a high in 2014 and like everyone else, we always get locked into the weird, the funny and the outright outrageous things that happen in our world as expressed on social media. However, there are times when it’s so hectic that social media becomes a too expensive distraction that although you want to take a peep, you cant afford to do so because of a deadline or some other time issue.

This is why we have thought a new weekly feature on Techzim that’s basically a compilation of the top 5 trending stories on social media throughout the week. This compilation will be complete with brief story backgrounds, screenshots of what people said and anything else that will help you stay in the loop.

We start today. Here’s the top stories from social media throughout this week.

1. #PastorLesego says eat grass to get closer to God

South African Pastor Daniel Lesego dominated media throughout the world when photos of his congregants eating grass under his instructions went viral on social media. Although the people who follow Pastor Lesego were quick to defend his rather awkward methods to “connect with God”, people took to social media to ridicule and condemn the methods. On his part, Pastor Lesego said there is more coming.

2. Prophet Makandiwa waiting for instructions to raise people from the dead?

Although this strory was missing in mainstream media, #Makandiwa was trending on social media over claims allegedly made by his Aide that he (Prophet Makandiwa) was “waiting for a few instructions from God” to start raising people from the dead. Here’s how the story played out on Twitter.

If Prophet #Makandiwa is “waiting for a few instructions from God” to begin raising people from the dead, who should he start with?

@byo24news ‘Waiting for instructions from God” basically means we are still working on the act, we are still polishing it up #makandiwa

3. HerZimbabwe VS. Newsday over Tin Tin

Her Zimbabwe took exception to the way Newsday described Tino Katsande as “battered” in a story about her own revelations about a condition she has.

Dear @NewsDayZimbabwe, your use of the word ‘battered’ in the article about Tin Tin is really uncalled for. We are concerned.

Newsday saw nothing wrong with the description maintaining that their description was “fact” as Tin Tin’s image was damaged, by well, you know what.

@herzimbabwe We are just dealing with the facts :Her image has been ‘battered’ after the leaking of the sextape and her dismisal from work.

Prominent #Twimbos particularly @SirNige and @joeblackzw weighed in with their own opinion (supporting Her Zimbabwe of course) and soon, Newsday faced an unexpected backlash from both man and women expressing their disappointment at how they had described Tin Tin. It seems they did not know how to deal with it and just disappeared under a rock.

Tino tweeted #broken apparently suggesting her state after the Newsday’s “error of judgement” but eventually #GirlPower seemed to have carried the day. 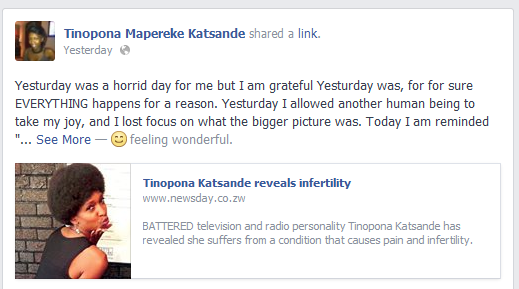 Twitter was abuzz with disgust over ZRP’s lack of will to deal with corruption. However, with the ZRP not on Twitter, most messages were directed to The Herald who broke the story, with the sensational headline “33 Traffic Cops Sent Packing” which gave the impression that the corrupt cops were sacked.

How ZRP deals with corrupt cops: Don’t arrest or fire them. Send them to be corrupt elsewhere –> http://t.co/aktcU1e9Ze @HeraldZimbabwe

It’s quiet apparent from the headline that The Herald wanted to give the impression that the cop bosses were doing an sterling job in fighting corruption.

In a well executed stunt to promote a new movies called The Devil’s Due, Thinkmodo created a mechanical devilish baby doll to literally scare people in New York. The hilarious You-Tube video has close to 30,000,000 views in just three days.

9 thoughts on “New to Techzim: Your top 5 #trended on social media fix”